Since they were so much better organized this year, things moved much more smoothly.

They stowed our possessions ahead of time so that we were desperately chucking a folded stroller at the head of the nearest minion. Owl kept his shoes on.

I could hear Patrick Stewart talking to the people ahead of us, and guys, he sounds EXACTLY LIKE ON TV – that same Shakespearean projection, everything. Just awesomeness.

Then it was our turn. At first Perfect Husband was jumbled next to Patrick Stewart, but when Sir Patrick saw me holding Owl, he said in that oh-so-posh voice, “Ah, yes, let’s have me in the middle,” and Perfect Husband moved over to his other side.

And then, AND THEN, SIR PATRICK STEWART PUT HIS ARM AROUND MY SHOULDERS.

JEAN LUC PICARD PUT HIS ARM AROUND ME.

I am NOT a gal for the older men, and have never taken the slightest interest in people like George Clooney… but a Shakespearean actor (Perfect Husband and I met in Henry the IV Part I, and became friends during a production of Hamlet – ’nuff said), who commands a starship like Captain Picard does, and who stands up against violence towards women…

…Well, let’s just say that while he may be only a couple years younger than my father, I swooned a little inside.

Owl was wondering who this man was, and stared open-mouthed at Sir Patrick while the camera man and the minions tried to get him to look at the camera.

And then Sir Patrick Stewart proved that he is not actually Jean Luc Picard. He spoke in a warm and encouraging voice to the little child, pointing to the cameraman in his stripy orange shirt and saying in a jolly tone, “Look at that man with the camera! He looks like a bumblebee!”.

And so, we have this photo:

With Patrick Stewart’s arm around me, and his mouth clearly finishing the word “bumblebee.”

Could it be more amazing?

I left with a warm glow from knowing that Patrick Stewart TOUCHED ME, and that I will never be able to watch Next Gen again without hearing this in my head: 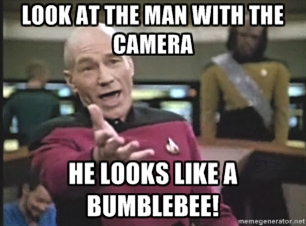