My new boss made us all go to a sort of business seminar thingy, which was a little weird because it was run by Scientologists. But I heard something there that really struck home with me:

The coach said that you need to put in 10,000 hours of work before you become truly expert at something.

Now, I’m sure there’s nothing magic about that particular number. I Googled it and the author of Outliers, who made this claim, bases this on examples of people who got famous after doing something a LOT, including the Beatles who logged 10,000 hours of playing time between 1960 and 1964, and Bill Gates, who logged around 10,000 hours of programming time as a kid. What the number does do is give a general bookmark, a rule-of-thumb, which helps to define “A WHOLE LOTTA TIME”.

It sounds impossible, but that also explains why there are so few true experts in any particular given field.

I haven’t logged that many hours in dog training, yet, but I’ve probably logged about 5,000 if my estimates are close to accurate. So I’m half expert. I’ve certainly done enough to become competent.

The 10,000 hour rule makes sense to me and is actually quite liberating. Obviously, one needs an aptitude to do really well, but even if you do have an aptitude, you still need to practice.

The problem is that we don’t tend to grow up with this mindset, especially if we were considered “smart” as kids.

The western world places a lot of weight on innate ability. We think that either we have a gift for music, or writing, or art, or math… or we don’t. We test our pre-schoolers for genius, and weed out the “gifted” from the average kids long before their brains are even close to mature.

But by then it’s too late – the gifted programs are already filled.

Why do they spend so much time talking about how to challenge the smart kids, instead of teaching kids how to meet a challenge?

More and more research is coming out showing that telling our kids that they are smart may actually be damaging their self-esteem and chances in life.

While that sounds ridiculous to start, those of you who DID grow up being “smart” may already be nodding your heads.

When you are a “smart” child, school is easy. You are told that it is easy because you are so “smart”. So what happens when something is suddenly challenging?

Research is beginning to show that those of us who believed that our success in school was due to our innate intelligence actually give up faster and feel worse about ourselves than people who believed that life is something you have to work at.

Then they offered the kids to take another, more challenging test.

Interestingly, the “smart” kids almost always turned down the opportunity. Having already achieved a “smart” label they didn’t want to risk failing and no longer looking smart.

The “hard working” kids, on the other hand, almost always accepted the challenge, because they wanted to keep looking like hard workers.

Even more interestingly, the “hard working” kids persisted at difficult questions longer than the “smart” kids, and when asked later on which was their favourite puzzle, usually chose the most difficult one.

“Smart” kids gave up very easily, saying “I guess I’m not good at this one” and when asked which puzzle was the best, chose the one they found easiest.

If any of you “smart” kids out there weren’t nodding your heads in recognition at the beginning, I bet you are now.

I recognize myself in these studies, so does my friend The Farm Fairy, and PH is a perfect example of the “smart” effect.

PH is a genius.

He was accepted by Mensa when we were still in University and they told him that he was probably the 16th smartest person in the province.

But he did not get good grades in University.

He had never had to work before.

his parents say he began recognizing words at 18 months old

Even though his parents held him to very high standards, PH coasted through the public school system.

He never had to exert himself in order to achieve a good grade.

Even when his own mother was his English teacher, and marking him as strictly as she could, she was forced to give him the English award, after taking his work to her fellow teachers and saying “my son has the top grade in the class…” they looked through his work and agreed  – she had to do what no teacher ever wants to have to do with their child – put him at the top of the class.

PH is smarter than 99.9% of the people he walks past on the street, and when you’re that smart, you don’t have to try very hard to do better than the others.

The problem is that when you are told again and again that you are innately more gifted than other people, and your success is put down to that (even if it’s true), it changes how you approach problems.

When you suddenly come up against something that is difficult, you think, “uh oh. My innate abilities don’t seem to be helping me with this one,” and you give up because you don’t have any other tools in your mental toolbox. Either you’re brilliant at something, or you aren’t.

So PH holds himself to ridiculously high standards.

He loves curling and did very well in junior leagues as a kid. But when he rejoined a curling league a couple of years ago he came home every Tuesday night in a foul mood, because he hadn’t thrown as well as he expected.

He hasn’t played softball in years, but if he joins a charity softball event, he curses himself for every missed hit.

When he finds himself in the vicinity of a piano, he lays his hands on the keys and beautiful music floats into the air. After a few minutes he hits a wrong note and curses, and stops – he used to be able to play that piece perfectly. 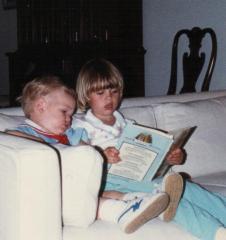 I took longer – I was reading by age 3, though

I got off a little luckier in life than PH did.

I was a bright kid with an aptitude for English – I remember that in the IOWA exams I scored well into the 90th percentile for language, and people are still impressed that I can spell chrysanthemum off the top of my head. But I’m no genius.

Secondly, I was in private schooling up until grade 8. Every year my teacher would be impressed with me for a week or two, and then would start raising his/her standards. It wasn’t good enough for me to be better than the other kids. I had to be better than myself if I wanted a good grade.

I remember getting a D (the lowest grade I had EVER received by a country mile) on a test that I hadn’t bothered to study for, because I knew the book inside out. I am willing to bet you money that it was still better average, but my teacher knew that I hadn’t put a drop of effort into it, and she wasn’t afraid to give me a D to shake me up a bit.

So I did have to work at school, up until we moved back to Canada and I got put into the public school system. The teachers there were too busy, too jaded, and had too many kids who couldn’t read at all to bother with trying to demand higher excellence from me. They were just pleased that they didn’t have to worry about me.

I coasted the rest of the way.

Nevertheless, before I moved North, my demanding private school teachers taught me how to take notes, how to study, how to write a difficult test, and how to meet deadlines.

I did fine in University… with a lot of hard work.

But generally, I have always given up easily. When I try something, and fail, I think “I can’t do it” and that is it. I place a lot of my value as a person on my intelligence, and when I start feeling stupid, I get really depressed. I fear failure. Failure is my enemy.

…just like those “smart” kids who declined the more challenging test.

I have always wanted to be an author, but when I sit down to write, I start thinking about how much my writing sucks (if you think I’m hard on Stephenie Meyer, you should hear me critique myself…) and the page stays blank.

The Domesticated Nerd Girl recently made a post about her love of drawing, and how she gets discouraged when genius doesn’t flow instantly from her pencil.

We had to wait until our thirties to discover it, but we’re learning – that (shock and surprise) talent takes effort and time.

So far, it could go either way. Owl IS hardworking. He loves a challenge, whether it’s the daily failure of trying to put on his own shoes (on the wrong foot and backwards) or the challenge of climbing every piece of furniture, every chair, and every rock he can find.

But people are already starting to tell us that he’s smart.

Mind you, parents are always told that.

But Daycare Lady says he focuses longer than the other kids his age (19 months), and is starting to outdo the two year olds on counting, identifying objects and so on.

Maybe he is smart, but his chance of success in life is much more closely tied to his love of the challenge.

So we try really hard to not tell Owl that he’s smart.

Oh, it happens occasionally, because somehow “congratulations, you did it through hard work and determination and not through innate ability!” doesn’t slide off the tongue as easily.  But we’re really trying not to overdo it.

And meanwhile, if I want to become the famous author I’ve always wanted to be, I’ve got to log more writing time, otherwise I’ll be eighty before it happens, if I live that long.