Everyone said we were crazy to do it, and we knew that they were right.

You do not travel two weeks away from your due date.

You especially do not travel close to your due date IN THE UNITED STATES.

The cost of American health care is infamous. BC radio is filled with Pacific Blue Cross commercials featuring John Cleese, in which he plays a greedy American (?) doctor called Nigel Bilkington who does x-rays on you just to make sure you have your wallet on you before you even receive care.

On the way to the border there are big signs reminding you that even a day trip can result in a broken bone and thousands of dollars of debt.

It’s important to remind Canadians of this because we take free health care for granted.

PH and I have cross-border insurance.

But no insurance will cover you if you wander into the states while totally full-term and end up having a baby there. I can’t even imagine what an emergency C-section or something would cost.

So why would we go?

We go to Emerald City Comicon in Seattle every year. It has become a family tradition. Every year we get a new family portrait with some geeky-famous person. The first year was George Takei.

The next year was Patrick Stewart. 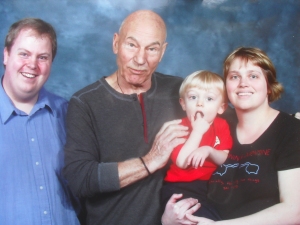 I didn’t get around to posting about it last year, but we went again and got our photos taken with Alan Tudyk, otherwise known as Wash from Firefly as well as about a million other characters.

He put his arm around me. It was awesome.

This year, Levar Burton was scheduled to be there, and I couldn’t miss my chance at getting a photo with Geordie LaForge/The Reading Rainbow guy.

So we bought tickets. I bought a maternity shirt that read “The Next Generation” right over my belly.

We also packed a hospital bag.

We figured that if we drove like hell, we could probably get back to the border within a couple of hours, and there was a hospital just across the border. All I had to do was hold the baby in ’til we got there.

Everyone told us it was a bad idea.

END_OF_DOCUMENT_TOKEN_TO_BE_REPLACED

PH and I drove to Seattle for Emerald City Comicon. We’ve been looking forward to it for months, ever since we found out that George Takei, a bunch of PH’s favourite web comic artists, Christopher Lloyd, and a bunch of great voice talents would be there.

My only disappointment was that Journey Quest didn’t seem to be making an appearance. Then Christopher Lloyd dropped out and I was more diappointed.

Nevertheless, the lure of George Takei was strong, and PH and I haven’t had a trip to Seattle since Owl was born. We went to stay in our usual motel, a sleazy inn with rates to match, but with the added benefit of in-room private Jacuzzis in some of the rooms. Carol Heaven. Probably also Chlamydia Heaven, but so far I’ve been lucky.

In preparation for meeting George Takei, I ordered a special onesie for Owl. After all, you don’t get to meet a Meme Hero every day. 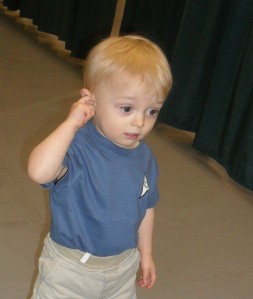 I'm going to meet who, now?