Thanks for waiting. I know you’ve spent the last week wondering “Was it the dog or the baby??”

The answers you have been longing for are finally here. 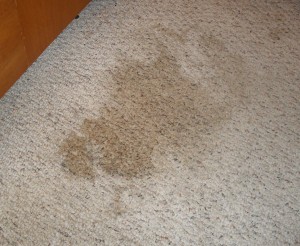 Exhibit A - stain on the carpet: Dog, or Baby?

Man, I thought I’d get you guys for sure with this one. Surely brown stain on carpet = dog? But you were too clever for me! Yes, Owl did this. He managed to get his hands on a bottle of liquid Claritin and dump it all over the carpet. We THOUGHT we cleaned it up well, but I guess there must be some residual stickiness, because it has become increasingly more brown as time has gone on as it slowly gathers dirt from the detritus of our lives… 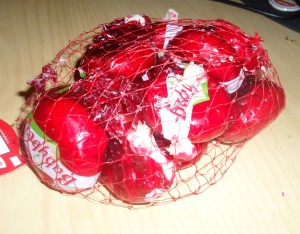 That’s right. Owl chewed through the plastic mesh, through the wrappers, through the wax, and destroyed half of our Babybels before we even arrived home from the grocery store. 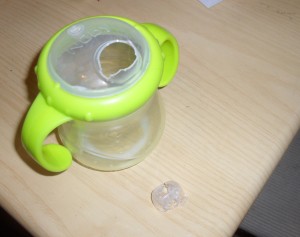 Apparently it was left on the floor, with milk still in it… Beloved Dog must have thought this was a new puzzle… It’s a shame, too, because Owl picked this cup out himself at the store. Ah well… 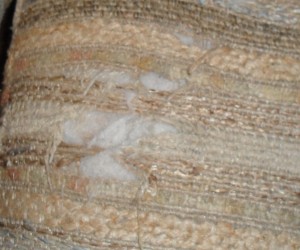 Owl not only took a small hole in the cushion fibres and picked it into several large and gaping holes, but he now pulls the fluff out of them whenever he gets a chance. THIS IS WHY WE CAN’T HAVE NICE THINGS. 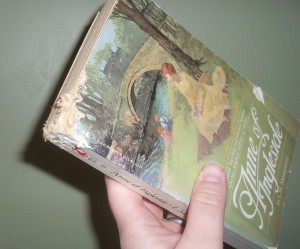 Beloved Dog wrecked this book in his youth, when he was two years old or so. Before we got the cat, leaving him with enough to do when I went to work every day was a challenge. This was the victim of a day when he did not have enough to do. So I got him a cat. He hasn’t chewed a book since… 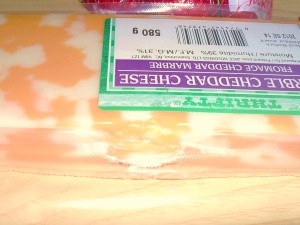 The dentition pattern gives this one away, I know, but I had to include it, because it happened in the SAME grocery run as the Babybel fiasco (notice the Babybels in the background). In fact, it happened WHILE I was putting the Babybels out of reach… 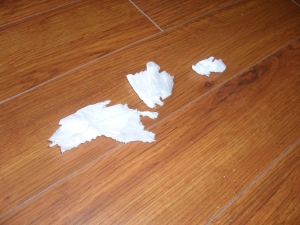 This one was a bit of a cheat, because it was really a toss-up. The Kleenex in this particular photograph was shredded by Owl, but actually Beloved Dog is just as frequently guilty of this exact same crime, even with the addition of the cat to the household. There’s just something fun to rip about Kleenex, I guess.

END_OF_DOCUMENT_TOKEN_TO_BE_REPLACED

And no, Beloved Dog doesn’t knock over Owl at any point.

I’m getting ready to fly home, so a short picture post today, featuring Babby as a hockey fan. 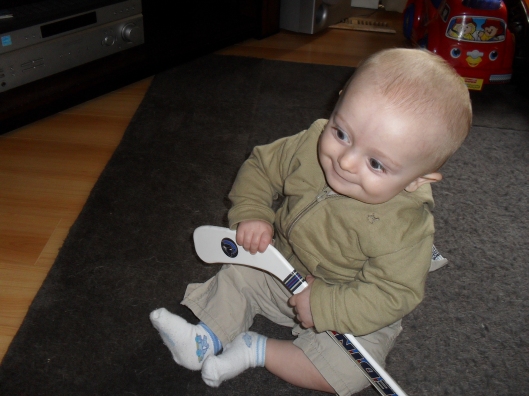 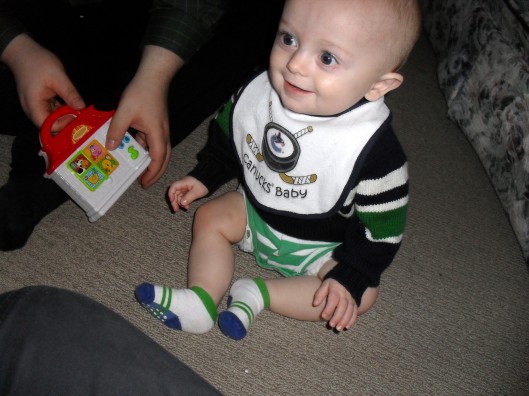 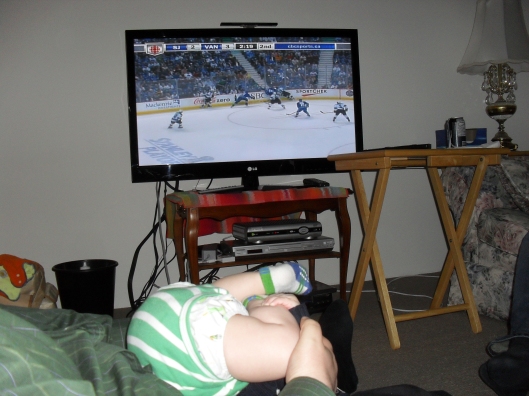 "Is this not the usual way to watch hockey?"

We got a new vacuum the other day.

Our old vacuum, a Bissel specially designed for picking up pet hair, has been sitting unused for the greater part of a year. I have only dragged it out and switched it on when the cat litter spilled or when the fur levels on the carpet upstairs had reached our knees.

It was a great vacuum once upon a time. In our old apartment, which largely featured open space, it sucked things up great. However,

Suddenly big-and-heavy-and-filled-with-goop was no longer appropriate for our household.  PH knew we needed a new vacuum, but kept putting it off, because, well, we don’t have any money.

Last week we went out and picked up a Bissel EasyVac for 40- bucks, and it runs great. It’s small, lightweight, no-frills, but it gets in the corners and gets the fur off of the floor.

However, it doesn’t run as smoothly as our old massive vac. PH was holding Babby when I flipped it on for its inaugeral run, and Babby startled noticeably and started to fuss while clutching his father’s shirt.

This is really the first significant fear reaction we have ever seen in Babby. Sure, he startles to loud noises – he even did that in the womb – but he had always recovered quickly. The old vacuum never bothered him, on the rare occasions that we lugged it out and dragged it along the floor.

But he’s getting older, and this one clearly freaked him out.

Now, I’ve never had a baby before, but I know what to do when dogs are scared of something:

Perfect Husband has seen me deal with fear reactions in dogs before, not to mention helping me through my anxiety exposure therapy CBT, so we immediately began to treat Babby’s fear in the same way we treat mine/a dog’s. We didn’t even have to discuss it. We’re a well oiled machine. A well oiled fear-fighting machine.

He hugged Babby and said “Oh, is that big noise scaring you? It’s just a vacuum. Look! Wow!”

I smiled at Babby and moved the vacuum around and said “Oh, it makes a big noise, so you’re scared, but it won’t hurt you. See, it’s a vacuum! I’m using it! Wheee!”

As I went around the room talking to Babby happily, PH slowly approached closer and closer. He stopped if Babby acted too frightened, and then once Babby relaxed a bit, inched yet closer again.  By the time I turned off the vacuum, Babby was right next to the vacuum (still in the loving safety of Daddy’s arms) and starting to relax. You could tell he still wasn’t pleased, but at least he wasn’t trying to climb his father like a tree.

We have noticed several similar fear reactions to loud noises since. So we think it’s time to start socializing him. If we want to avoid his picking up on my anxiety, we need to raise him with the CBT skills that I had to be taught in adulthood:

So when we saw that the Midway had set up at the local mall, we decided to take Babby. Sure, he couldn’t go on any of the rides (they wouldn’t even let us get on the sedate choo-choo train that went around an oval track a 5 km an hour which the conductor could stop with his hand and that had a sign saying “everybody welcome!”) but we figured it was good socialization just to be around all the noise and bustle. We always used to take dogs to the fair for the same reason.

So we loaded Babby into my new rebozo and walked around. 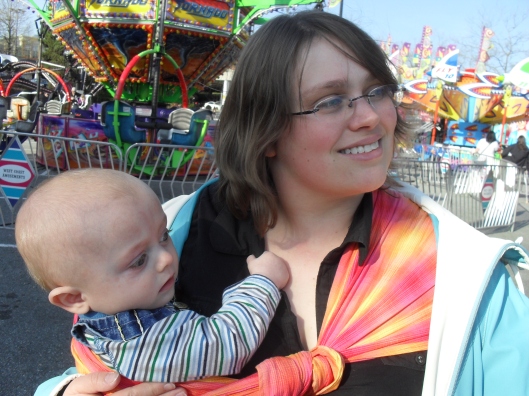 "Where are you taking me?"

As we predicted, the noise freaked him out. He was clinging tightly to me. He especially disliked that one that goes up and spins and holds everyone to its sides by centripetal force. I told him I don’t like that ride either. 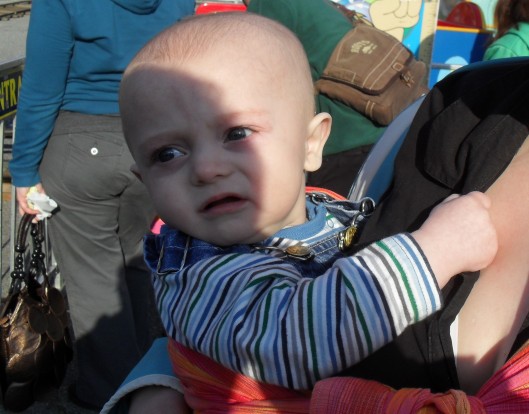 But I hugged him and told him that it was cool and pretty, rather than scary, and showed him that I wasn’t actually afraid of it (which is only partially true – I wouldn’t get on that thing if you paid me) and we walked all around and ate corn dogs and he began to relax. 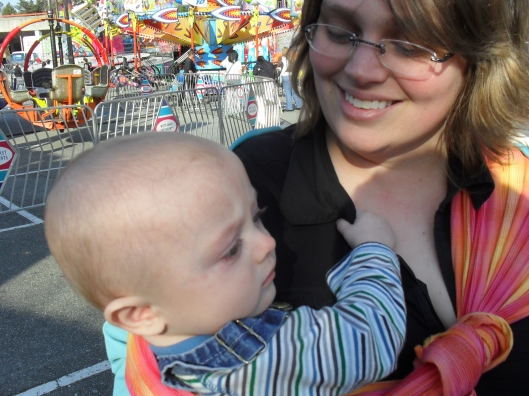 Then PH tried to win stuffed animals for me, as he usually does. He eventually gave up trying to win the GIGANTIC fluffy penguin toy, which would have taken up a quarter of Babby’s room but would have made me inexplicably happy, and eventually just won a stuffed alien that I liked, because it reminded me of my little Babby. 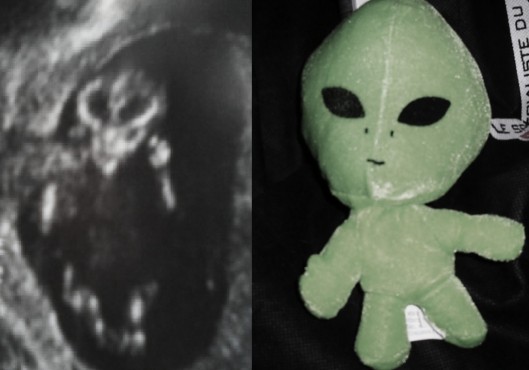 So, all in all, it was a productive day.

I don’t see a lot of myself in Babby. Well, looks-wise anyway.

I think he came out of me, but I was pretty out of it. Maybe it was an elaborate hallucination? One thing’s for sure – there’s no paternity uncertainty in this household. 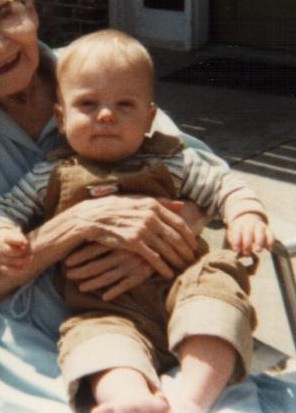 PH as a baby 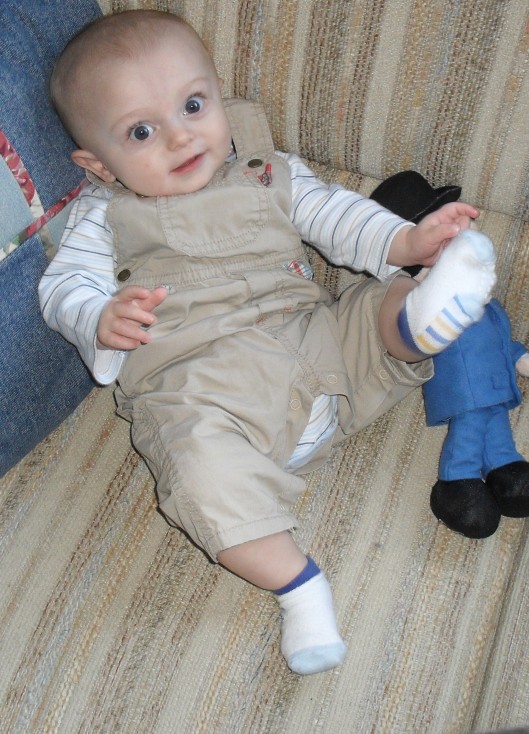 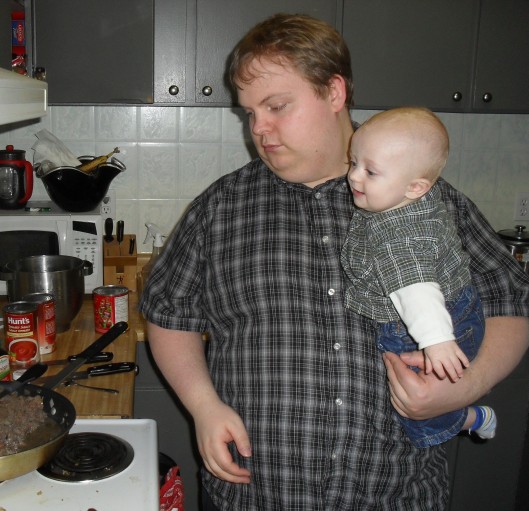 I’ve found a Vancouver talent agency that’s interested in Babby, although they warn me that business for babies is a little slow year-round. I’m not looking to turn him into a star or anything, but a substantial amount of my college fund was paid for by appearing in tv commercials and such, so I know it can be helpful. Even if we got Babby into one commercial, that would still likely be $2000 his RESP didn’t have in it before.

The agency wants a professional portrait for their files. I guess they have had too many experiences with parents going “Oh, actually, I dabble in photography myself, so here’s a photo that I took” while handing them a photo with dirty diapers in the background and a booger in the foreground.

The problem is, we have no money.

Not only did we recently buy plane tickets home for the late spring/early summer, but our car has suddenly decided that it needs a new air compressor, new shocks, and a new battery, and it took $350 bucks just to find that out. We haven’t dared ask for an estimate for the actual repairs yet, but we need to do it soon.

The upshot of all this was that PH and I did something that we never, ever, in a million years, dreamed we would do.

We went to Walmart.

It is a testament to PH’s love for me and willingness to support me in my whims that he even set foot there. You see, we are intellectual snobs and Walmart stands for pretty much everything that we hate. Yes, there are a lot of other companies out there that are just as big and corporate and evil, but there’s just something about Walmart that feels especially trashtacular.

Walmart is attracts people who are willing to line up like cattle for the slaughter all for the sake of saving a dollar here, fifty cents there. In general, this does not tend to be your highest class of person, and now we had joined their ranks.

The (soul-destroying) reason that we went there anyway is that we got 30 prints, including an “enhanced” 10X13, for nine bucks.

All we had to do was:

By the time we got in to the studio, Babby was sleepy, red eyed and nose-rubbing, and it took a long time to get a good smile from him. When we did, the red and watery eyes were noticeable in the portrait, and there was a black hair stuck to a booger under his nose, which may or may not show up in the enlargements. I’m not sure the picture will really show him off to his best advantage, but the agency wanted a studio portrait, and by gum, they’ll get one.

Except we have to wait two weeks for the portraits to be developed. Even though there is an 24 hour photo processing centre in the exact same room.

But hey, it cost less than ten bucks.