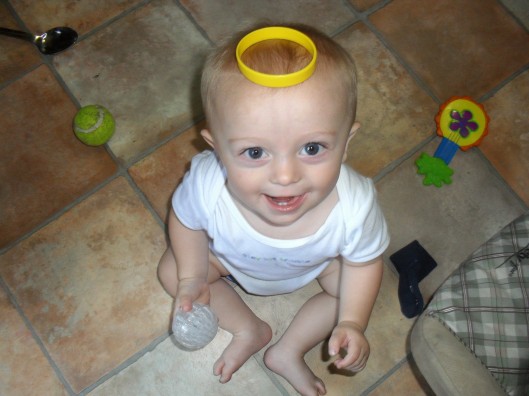 So, I’ve talked about re-nicknaming Babby, since he will soon not be so much a Babby as a toddler, and also because he is developing a personality and deserves to have that acknowledged.

Thanks to all who made suggestions! If you think of others, feel free to toss them out there, but in the meantime, please give your opinion on existing ideas.

I have considered, and tossed away, the following options:

Stubborn (too negative, since he is not so much STUBBORN as… strong willed/opinionated)

Cheerful (positive and mostly true, but will seem weird when I complain about his tantrums during the toddler years or when I post pictures like this)

Screamy McGee (it fits him less every day, although I am sure there will be days, during the terrible twos, when it will fit him to a tee…)

Perfect Son (an appropos suggestion, but possibly damaging emotionally to Babby’s future siblings, and untrue in any case)

% (another suggestion, to which I will not apply adjectives)

I am also concerned that it will be confusing to those who think of him as “Babby” to go to a totally different name, so I have considered similar sounding names such as:

Buddy (an actual nickname we use)

However, since these are actual people names, but not HIS name, I am afraid people might think my son’s name actually is Billy or Buddy, and that’s not quite right, either.

Other names still on the table:

Owl or Little Owl (a great suggestion, since my mother calls him this all the time, and he DOES have massive eyes, and he sure doesn’t sleep well at night)

Wol (because “owl” is awkward to say out loud, and because Owl in Winnie The Pooh spells his name Wol)

Willful (a more positive trait name, which I feel fits his personality more)

Goobs/Goobergeiger (a real life nickname of ours, taken from Mission Hill)

That is a normal concern, right? Am I misleading you all by making you think he is blue or another colour, when he is actually gold/brown?

Should his new name be another blue name, so as not to confuse my readership, or should it fit his real name in colour, thus aligning his nickname with reality better?

So, if it affects your judgement, Buddy/Bobby/Billy are more or less the same colour as Babby (because b is blue, you see). Owl and Willful are similar in colour to his ACTUAL name.

Just in case it matters to you.