Well, here we are, home.

Our week with Perfect Husband’s relatives in Wisconsin was an odd combination of relaxing and incredibly exhausting. 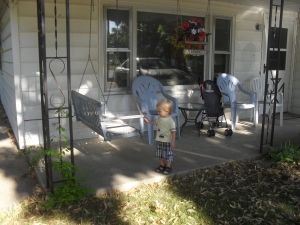 On the one hand, we mostly just hung around his grandmother’s house. There was a lot of watching baseball on TV, listening to repetitive stories, and meeting distant in-laws that I will never see again.

On the other hand, we mostly just hung around his grandmother’s house. There was a lot of watching baseball on TV, listening to repetitive stories, and meeting distant in-laws that I will never see again.

I felt like I had to mind my p’s and q’s at all times, because PH has terrified me with stories about his grandmother, who did have a penchant for recounting memories of times when she felt insulted, and graphic descriptions of the violence she wanted to commit in return (I heard the phrase “My, I wanted to jest to punch her face in!” far too many times).

In reality, she was perfectly sweet to me and just doted on little Owl. “C’mere and let me feed you!” she barked at him regularly, and then she’d chuckle as she spoon-fed him yogurt. “He’s just like a little bird!”

But I still lived in fear. PH told me not to read in front of her, because apparently the sight of other people reading has been known to insult her in the past. So mostly I just sat.

When possible we made excursions. We took PH’s mother and Owl to a Brewer’s game and we drove up to Green Bay where PH and his sister drooled over Lambeau Field and Owl toddled around going “Foot. Ball. Foot. Ball.” 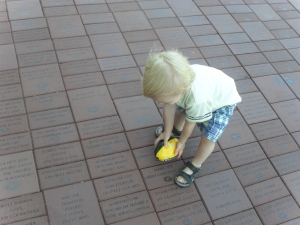 Only one of these relations actually showed up for our wedding, so I hadn’t met most of them. PH barely recognized many of them himself, and had no idea who others were. His American branch of the family doesn’t have much in common with the Canadian side.

Our stay with his distant relations involved a lot of racking my brain for polite rejoinders to announcements like these:

“Women must be stupid for going through the pain of childbirth more’n once.”

“We were so poor even the black kids weren’t allowed to play with us!”

“I just had the most blessed bowel movement!”

Ultimately, even though everyone was very nice to me, I was relieved to leave. I think it was more exhausting to my introvert sensibilities than all of Las Vegas.

But Owl certainly learned a lot about sports while we were there – PH is delighted. 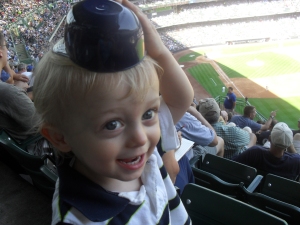 My lovable FIL is sometimes given to cryptic messages. His most recent one was sent to Perfect Husband via email, along with a photo of Babby on his walk through the snow.

I am hoping that you truly realize that you have a major duty to keep this lovely child very good natured for his first few years because his intelligence is so obvious. We want it to be a loving, gentle intelligence.

We’re trying to appreciate the sentiment with which it was intended, and ignore the subtle hint that he’s worried our baby may grow up to be Hitler if we aren’t careful. 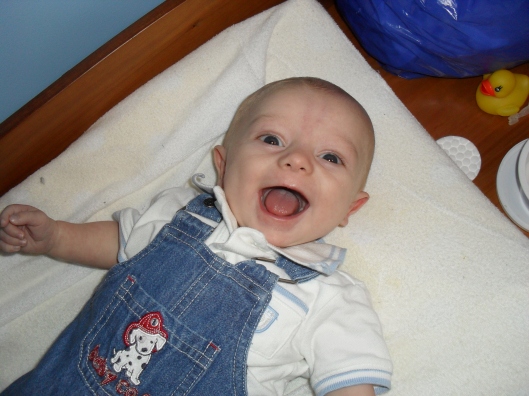 We must use this baby for good and not evil...