After reading about poor KellyKel’s cat on the DoCo, I feel the need to make this post.

Especially if you own a boy cat.

There is startlingly little regulation of pet foods, and some of the ingredients in pet store and grocery store pet foods are frankly harmful to your pet. Cats especially are at risk because their health is very delicately balanced on their diet. Cats eat a very high protein diet, and this is rough on the urinary tract system. If a cat lives to be 20, one day its kidneys will wear out and that will be that.

Cat’s bladders tend to develop crystals when the pH balance of a food is even slightly off. The crystals scratch the bladder wall and bacteria begin to grow. This is called Feline Lower Urinary Tract Disease. Vets refer to it as FLUTD (“Flutey”). It can happen to dogs, too, although it is rarer. Still, I have seen it! The crystals end up getting stuck together in that mass of crystals and blood and bacteria and white blood cells and they end up making a little stone. Sometimes (particularly with neutered male cats because their urethras are narrow) that stone gets lodged in the urethra and blocks the passage of urine.

From that moment on your cat has maybe 24 hours to live. Unable to pass urine, the toxins back up in the animal’s system and begin to kill your pet. Your pet will die either from the poisons that they can’t get rid of, or their bladder will BURST inside them. It’s painful. It’s deadly. It’s COMMON.

This isn’t something that is fairly rare. It’s something that actually fairly likely. If you walked into your local vet clinic and said “do you have a blocked cat in the back?” chances are they would say “yes,” and if it’s a big clinic, chances are they will say “yes, which one are you looking for?”  You want to scare a vet clinic? Call them and say “my cat isn’t peeing”.

There are a million reasons why a cat will get crystals. Stress is a factor. Dehydration is another (it is more common in cats who are eating dry food and don’t like drinking water)… and diet is yet another.

Many diets are poorly pH balanced. Not just your cheap grocery store foods (although they are the worst offenders) but expensive pet store foods, too. Being pricey doesn’t make it good, or safe. I have seen several pets come in with crystals caused by food, and they were eating a (WET!) high-end pet store product, boasting all-natural ingredients.

Pet owners look for phrases like “all natural!” “grain free!” “No additives!” “with fibre!” “with real chicken!” and so on.

They never think to look for “with a balanced pH for your pet’s urinary tract health.”

But if you have a male neutered cat, that is exactly what you should look for, because when your cat blocks, you have a choice. A vet bill totalling nearly $1000 or more… or a dead cat. If you choose “dead cat” you still have to choose between your cat dying in extreme agony or paying for a euthanasia.

Why does it cost so much to unblock a cat?

First you have to sedate the cat, because sticking a catheter up a blocked urethra into a bladder that is as turgid as an over-filled balloon is hideously painful AND difficult.

Then you have to keep it sedated until waking it up is no longer a cruel thing to do.

Then you have to give it antibiotics for the infection, and blood tests to see how badly poisoned the cat is.

Then you have to keep that catheter in its urethra for several days, draining the bladder of its brown or red infected pee.

You also have to keep the cat on drugs to relax the bladder so it won’t go into excruciating spasms.

…and that’s if the case isn’t too bad.

You may have to operate to get a larger stone from inside. This is more common with dogs. Check it out (yes, this is from my OWN experience, these aren’t pics off of the web): 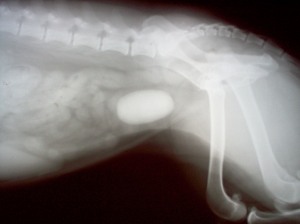 Yeah, that big white thing? That's a stone. IN A DOG. A female bearded collie if I remember right. 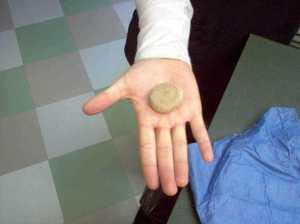 IT WAS IN A DOG'S BLADDER

Sometimes they can’t unblock it. Then they have to cut off the cat’s penis. This is not a choppy-chop operation, because you’ll screw up the urethra if you do that. It’s delicate surgery, and often one that vets don’t like to do – they’d rather call in a specialist or at least a vet who has experience with them. You basically do a sex change operation on the damn cat, so it pees like a girl. That’s REALLY frigging expensive. It’s a long operation, so there are sedation drugs and anesthetics and veterinary time (I’ve seen three vets all pending over one of these surgeries). There’s the long recovery, too.

So… you can feed your pet a diet from the pet store and hope for the best… or you can buy a veterinary diet because all veterinary lines are pH balanced to prevent such problems.

A veterinary diet for a healthy animal isn’t even that expensive. They have high quality ingredients (my favourite brand, Medi-Cal, is all naturally preserved, too) and research-driven formulas and they never change the recipe without warning you (which other brands do all the time).

Your pet will poop less on a veterinary diet because there aren’t any fillers (unless, of course, you buy a high fibre formula designed to make your pet poop more!) and you end up needing to feed a lot less because they are so highly concentrated. Veterinary diets often end up being CHEAPER than the cheap grocery store stuff, and that’s before the $1000 operation to save your cat.

Oh, and veterinary diets are 100% guaranteed.

Remember those pet food recalls? I know someone whose cats were eating the cheap stuff. One died, the other has permanent kidney damage. It took thousands of dollars to save it. The owner has never seen a dime from that company.

But the veterinary diets called our clinic and told us which formulas were tainted (and there weren’t many, because only a few specialty formulas had gluten in them at all). Then they told us to phone every client who bought those food in the last three months, and they would refund the money spent on food over that time frame. Then they paid to test each animal who ate those foods for signs of poisoning. Then they paid to fix the poisoned animals.

Next time you’re in your pet store, ask the clerk if your pet’s current brand of food guarantees their food that way.