If you read me on World Moms Blog, you’ll know that I have been fretting over Owl’s Canadian heritage of late.

He gets kudos for liking Forget You and Gangnam Style. However, he loses points for constantly requesting LMFAO and Bruno Mars songs.

You try and put on something tasteful like The Beatles or Barenaked Ladies and he says “No, no like it!”

So on St Patrick’s Day we decided to take him down to “CelticFest” downtown.

I was all excited for him to hear some read fiddle music and get exposed a bit to his Celtic heritage – my maiden name is Irish, after all.

But I had forgotten how terrible Vancouver is at approximating East Coast things. Even music, which you think would be fairly reproducible.

It looked good when we got there.

Of course the streets were full of people in green hats eating green popcorn, but there was a band on the stage with guitars and fiddles, and its name was “The Whiskey Dicks” which sounded promising. 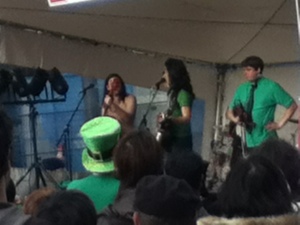 But then we got close enough to hear the music.

Owl had a good time dancing, at least… in a marching stomp to the TOTALLY NOT CELTIC MUSIC.

Our neighbour used to stand out in his backyard practising his bagpipe every afternoon.

When I was pregnant, I was obsessed with listening to Great Big Sea.

This music is important to me, and Vancouver can’t do it right EVEN IN A CELTIC FESTIVAL.

We decided to go to Tom Lee Music because there was supposed to be a sort of jam session with Mairi Rankin there. The problem was that it had started at 3, and by the time Owl woke up from his nap and we got down town, it was 4:30.

Happily, the people at front of house let us sneak in for half price, so we crept in for the last twenty minutes of the session.

Inside was a small group of people clapping and stamping their feet to real fiddle music – like a secret conclave of actual Irish/East Coasters, hiding from the Vancouver rabble in their shamrock hats while singing about colcannon and teaching each other Irish love songs.

This morning, he took his two plastic hockey sticks and walked around rubbing them together telling me “I play fiddle, Mommy.” 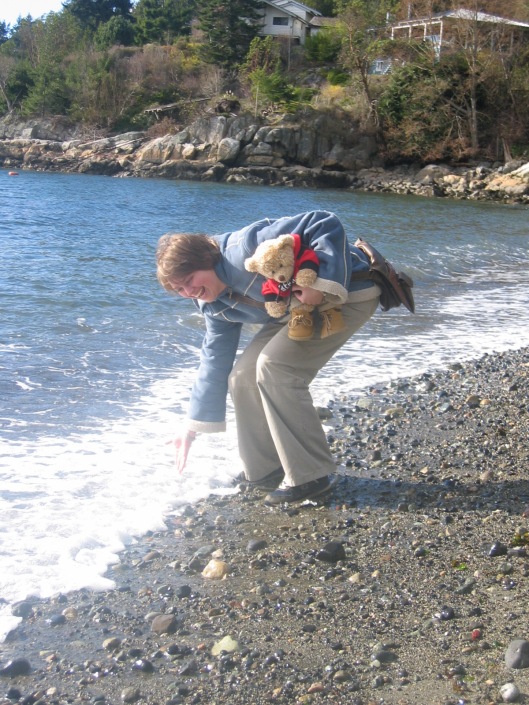 As someone who lived internationally as a child, I have a special relationship with my homeland. Canada was the place of my birth, the place of my ancestors, the place I was somewhat unfamiliar with. We returned to Canada when I was 13 and I began to discover it outside of books and summer visits to relatives. I have lived in four provinces, and visited four others.

So what defines Canada?

In a country as large as ours, unity is difficult. America fights dissension with the “melting pot” principle. An American teacher once explained to our class that the American curriculum was actually designed to promote ignorance of other nations, ignorance of world geography and politics, and promote pride in being American. He pointed to the problems Canada has between Francophones and Anglophones, rivalries between provinces, and even arguments between Indiginous and Non-Indiginous peoples. America fights that in their curriculum by telling the kids over and over “You are American, and America is the best”. They don’t want any more civil war.

That doesn’t fit the Canadian mentality, which seems to be much more “now, kids, can’t we talk about this in our indoor voices?” when it comes to mediating internal disputes. Even when Quebec clamors to separate, we simply let them put it to a vote and pray like heck that over half of them will prefer to stay Canadian. Civil war is not in the cards because it’s too cold up here to get riled up about things.

Canada is a large and varied nation, and culture varies from province to province, and from city to city. Halifax and Vancouver don’t feel like the same country sometimes. Quebec certainly does not. But all of it is Canada.

Canada is the fresh, open spaces of the West, with brand-new cities just beginning to sprout up in the shadows of the mountains, and largely populated by immigrants from other countries. In a way, the West in Canada is still being colonized.

Canada is the stiff, salty winds in the East, echoing the shouts of days long gone – privateers and fishing boats being wrecked along the rocks.

Canada is not American.

Perhaps this is how we define ourselves best – Not American.

After all, much of the population of Canada was once made up of Royalists: people who didn’t want to have a revolution with the British, but didn’t want to BE British, either. They moved to Canada, all of these indecisive in-betweeners, and they live here still. We don’t want to be British, but we do like to wave at the Queen when she graces us with a visit. We certainly don’t want to be American, but you aren’t really considered famous until the Americans can recognize you, too. We want to be free of stuffy British conventions, and free of America’s obsession with personal freedom, which seems to largely involve infringing on other people’s personal freedoms.

But I think that as long as I live out West, I will still think of Canada, of home, as being the East. The Rocky Mountains are part of Canada, sure, and even the babel of other languages I hear in the grocery store is part of Canada – our blessed salad bowl, where everyone can live in peace and continue to pretend that they are living in the country they just left.

But my favourite Canada  is in  the sight of sun-bleached lobster traps piled on a dock. Canada is the sound of bagpipes accompanied by the roar of waves at Peggy’s Cove. Canada is the sight of tall ships gliding into Halifax Harbour. Canada is in the whimsical accents of Nova Scotia and Newfoundland. Canada is in a culture so rich that the death of Alexander Keith is considered still worth celebrating, and a country so young that our history has not yet been buried by time.

The words of Stan Rogers say it for me…

It was in the spring this year of grace,

with new life pushing through

That I looked from the Citadel down to the Narrows

and asked what it’s coming to.

right down to the water line,

And I heard an old song down on Fisherman’s Wharf.

Can I sing it just one time?

…
“Then haul away and heave her home.”

This song is heard no more

No boats to sing it for.

No sails to sing it for.

There rises now a single tide

of tourists passing through.

We traded old ways for the new,

old ways for the new.

“What’s this romantic boy who

There was no romance on a cold winter ocean

and the gales sang an awful song.

But my fathers knew of wind and tide

and my blood is maritime,

And I heard an old song down on Fisherman’s Wharf.

Can I sing it just one time?

…And now, Perfect Husband and I will celebrate Canada Day on the West Coast by… visiting Point Roberts.