People love to ask you how your baby sleeps, and I have occasionally told people that Fritter sleeps “great!” only then to clarify to say that she still wakes several times a night.

You see, our bar is set LOW.

Until he was nearly two, Owl was waking multiple times in the night, usually every hour and a half. 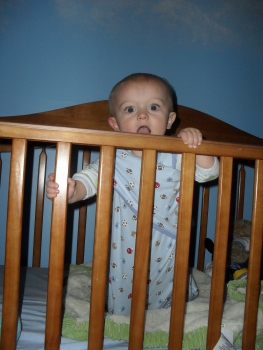 Meanwhile, Fritter from day one would sleep in two to three hour stretches. There were some caveats – she couldn’t be put down, for example. I tried. Oh, how I tried. But if you put her down, she would wake up, until about 11 pm in the evening.

Those first couple of months I spent my evenings watching The Mindy Project with her nursing and fussing, and about an hour after she fell asleep I would transfer her to the Moses basket and she would sleep for another couple of hours.

Once my anxiety about SIDS was relieved enough that I could leave her alone to sleep (around 5 months), I started nursing her down on my bed and then just sneaking away. By adding our trusty old Sleepy Suit to the mix, I was actually able to pick her up off of the bed and transfer her to the Pack N Play next to our bed (the successor to the Moses basket).

And so, I have been pretty okay with her sleep overall. She would go down to sleep at around 8 pm, sleep until midnight, until 3, until 5 or 6, and then until 7 or 8.

I could HANDLE that.

But lately, that has been falling apart.