Every parent I’ve spoken to agrees – the selection for girl clothes is way better than the selection for boy clothes. The girl section is always twice the size of the boy section, and full of adorable pea coats, polka dot dresses, and bluejeans with butterfly embroideries. Meanwhile, the boy section is full of grubby looking t-shirts covered in corporate characters like Batman and Ninja turtles.

I guess Owl agrees, because one day we were trying shorts on him in the store and he looked longingly over to a rack of pink tutus and said wistfully, “Someday… when I’m a girl… I’m going to wear that.”

PH and I exchanged looks. We looked at the price tag of the tutu. Seven dollars.

“No, but those are for girls.”

“Yes, they are,” I said. “But you can PRETEND you are a girl. I mean, you wear a fireman suit sometimes, but are you a really a fireman?”

He has never been so excited about a piece of clothing. He carried it proudly to the cashier, and insisted on donning it the moment the transaction went through.

We were pretty amused, and took some pictures, and tried to cherish this moment while it lasted. We got seven dollars worth of cuteness just that night at Montana’s alone, where he did pirouettes for the admiring waitress. 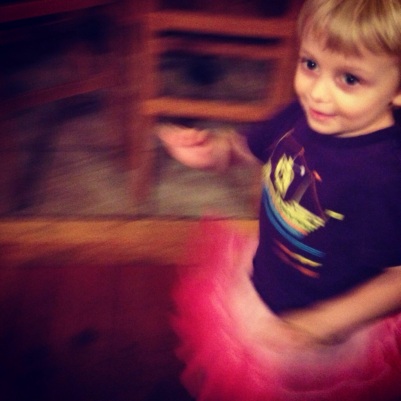 That was months ago.

He STILL loves his tutu.

We won’t let him wear it to school, ostensibly because tutus are dress-up clothes, and it is no more appropriate to wear tutus to school than to show up in his shark costume. The real reason, though, is that there is a boy at his school who is a little punk and would tear him a new one. This charming child introduced words into his vocabulary like “dead” and “kill” and “gun”. The same kid also taught Owl that pink is for girls, among other things. Once I took him to school with his nails painted and he came home and said “Little Punk says that nail polish is FOR GIRLS.”

God knows what would happen if Owl showed up in a tutu.

We’re not just trying to protect Owl’s feelings – we don’t like things like that parroted at him and we’re not going to set up opportunities for him to receive a lecture in gender norms from some four year old peer.

Other than that, he can wear it pretty much anywhere. He wears it to the store and playing around our complex and out to the park. He wore it to a boy’s birthday party, using the logic that birthdays are a dress-up occasion. We couldn’t argue it and so he went. No one teased him. One larger boy did see and point, but Owl didn’t notice. The other three year olds didn’t even blink. 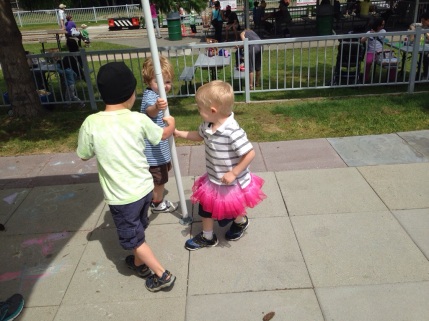 He was just another boy… in a tutu.

He even sleeps in it most nights. Last night he didn’t sleep with it, but he must have put it on first thing in the morning because he was wearing it when he crawled into bed with me this morning, saying “I’m pretty now, Mom! I’m VERY PRETTY.”

We don’t know if this is a phase or not. We used to think so, when he was a baby. It was his love of pretty dresses that turned me into a feminist. We thought he’d outgrow it once he understood about gender. Now we aren’t so sure. He spotted a doll in PH’s study and wanted red lips like her, so I came home to find him wearing lipstick.

For the most part, he seems all boy. He likes to pretend he’s a super hero who fights bad guys. He likes to shoot things, and destroy things, and he has the restless energy of a male child. But he really likes to do these things while wearing a pink tutu. 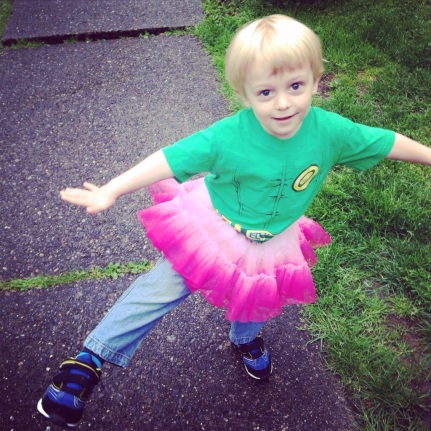 Maybe these are the sort of passing inclinations that all children have, and PH and I have seen more of it because we don’t discourage it. Maybe other boys admire tutus and their parents just nod and keep walking, which is what we almost did. 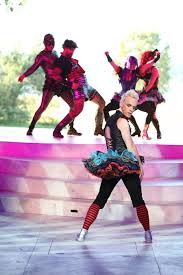 Will this be Owl in twenty years? 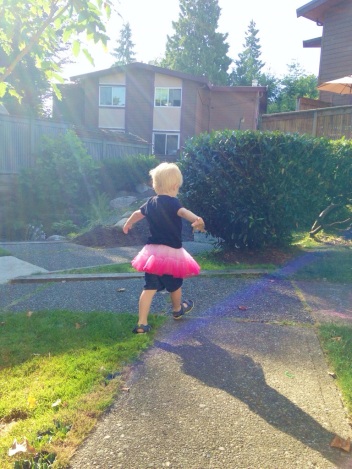 That’s the part that I don’t want him to outgrow. I want him to always know that it is okay to be whoever he wants to be.

As long as the Little Punks of the world don’t wreck it too much for him.