Before you pelt me with garbage, I’m talking about the real life version, not the strangely addictive app with the noises that sound like the women in Monty Python sketches.

That’s right – if you didn’t know, they make a REAL LIFE VERSION.

I mentioned it briefly in my post about Owl turning three, but I want to explain in greater detail why this may have been one of the best toys my child has ever received.

First of all, let’s just take a moment to admit that while most Angry Birds merchandise, including candy, is stupid as hell, you KNOW you want to run out and buy this thing so you can play it in real life.

Kids love to knock down towers, and apparently, adults do too, judging by how many grown ups play Angry Birds.

The birds are very light and fly surprisingly far if you pull their little catapult down all the way. Even if one hits you accidentally, it doesn’t hurt any more than a ping pong ball. Less. They’re softer and about the same weight.

Unfortunately, to counter that is the fact that the beams of the little piggy towers have to be very light too, so that birds can actually knock it down. That means that they are cheap plastic, as opposed to the real wood you might dream of.

But at least you don’t have to worry that the birds flying around your living room will break your tv screen or knock your ornaments off of the shelf.

Virtually all of the aspects of Newtonian physics get some play some way or another, from gravity to the three laws of motion. 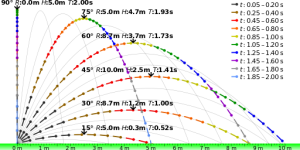 The game comes with little cards, since it’s meant for older players who can do things like read. You pick a card, build the tower on the card, and your opponent tries to knock it down. More difficult towers get you more points if you actually knock it over. 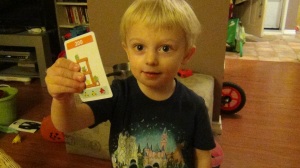 When we opened the box, I just set those aside, because I didn’t intend for Owl to play with the game competitively. I wanted him to play free form.

But his inquisitive little self immediately honed in on the cards and without needing any explanation understood what they were for.

“Mommy, I want to build DIS one!” he would announce, holding up an immensely complicated card.

“No, honey, look, let’s try making our own!” and I would start stacking blocks.

And so I would occasionally build them for him, the better to knock them down, my dear.

But I soon realized that he was much more capable than I thought of looking at the card and then constructing an identical tower. He would help me while I built, and I saw that he could look at the card and know that the piggy with the moustache should go HERE and the two triangle blocks should go THERE.

Now I know that he can sit there and, referring to the card, build a tower himself, balancing things carefully as he channels his inner perfectionist and works to match everything perfectly.

Which brings me to…

Let me tell you, some of those towers are HARD to build. At first, I was convinced that some were impossible. But a night at our kitchen table after Owl went to sleep proved me wrong – PH was able to construct even the most challenging ones.

But damn, those are hard.

Because it often involves balancing one beam on another like a T, and then putting things on either end, which needs to be done simultaneously and without a single tremble of the hand.

Even harder, some involve two of those next to each other, like this: T T and you have to balance a pig on the middle, straddling the end of both top beams. If you have it even slightly to one side, the whole thing comes down like a stack of cards.

And now my child is trying to do those.

I watched him the other day. He built a T, then tried to put a triangle on one end. It fell.

“Oop,” he muttered to himself, and picked up TWO triangles. Then he tried to balance them on either end simultaneously, but his hand shook and it came down again.

“It came down AGAIN!” he said, laughing and shaking his head. He set to reconstruction, tried a third time, and this time the T balanced, with a little triangle on each end, no teeter, no totter.

Owl first asked the question while playing the original app.

I admit I hedged a bit. “They’re… they’re just angry at the piggies.”

“The… the piggies took their eggs, honey.”

“No, honey, they’re angry at the piggies for taking their eggs. They want to get their eggs back.”

“Well, what do baby birds hatch out of?”

“Yes. So their baby birds are in those eggs.”

This storyline troubled him somewhat, and I heard him muttering to himself a lot while playing.

Well, there’s a little plastic pair of eggs that come with the Knock On Wood game.

Owl sets it up along with the rest of his piggie towers, and when the tower is thoroughly smashed, he reunites the birds with their eggs.

No, I have not been asked to review this by the Angry Birds peeps, but if they were to offer me an incentive to review their other Angry Bird games *cough*freestuffformykid*sneeze* I would probably be happy to do so.