Some of you may remember that a year and a half ago, I threw myself into a panic over Beloved Dog. Some routine bloodwork based on my paranoid suspicions revealed that he tested positive for pancreatitis, despite having none of the symptoms of it.

I put him on a low fat diet, rechecked him a month later, and he STILL tested positive. So I sent the blood to the lab for a more detailed answer. I wanted to know HOW positive.

Well, ultrasound showed pretty much nothing. Ditto when, a month later, Beloved Dog began urinating tea brown liquid. A little thickening of the bladder, some funny nodules on the spleen that, when tested, turned out to be nothing significant.

So, on the advice of the ultrasound vet, I dismissed it as nothing. He said that the spec CPL test is wrong sometimes.

Just to be sure, I put Beloved Dog on an extremely low fat diet. But his weight melted off and he got skinny as hell. And I’ve always kept him pretty lean to begin with, so we’re talking prominent ribs, sticky-outy spine, etc.

I changed his food to a more moderate level of fat and simply kept him away from fatty treats.

And he seems to have been doing fine.

The fact that he has taken to having bowel movements in the house. Even if he pooped outside earlier that day. Several times.

I mean, he was never a CUDDLY dog. Not the way a Lab or a Pug might treat you like their personal cushion. But he liked to lean up against you, It seems like over the last few years that has faded away. Now he wants to curl up in a corner and for you to leave him the f*** alone.

Behold, my doggy fortress of solitude

Then there’s the abdomen thing.

Whenever a dog comes in for an exam, vets always palpate the abdomen. Sometimes if there’s a cancer or something in there they can feel it, and how well the dog tolerates it can tell them if his stomach hurts or not.

That test doesn’t work on Beloved Dog, because he always grunts and hunches if you touch his belly. I dismissed it as a mannerism, until the pancreatitis test last year. Now I’m not sure. Humans with pancreatitis report it as excruciatingly painful, even in chronic form.

Anyway, I just left the matter to rest. After all, he SEEMS fine. Likes to run, loves to eat. Gets into mischief occasionally. Hell, compared to a lot of the fat, greying, stiff-limbed 9 year old dogs I see at my clinic, he seems remarkably youthful.

Then, on Sunday, I fed him a piece of lean steak leftover from Owl’s bowl. I was thinking “to hell with the pancreatitis thing. He’s been fine for a year. There’s no fat on this piece, anyway.”

My nose woke me up at 6 the next morning. We pulled back the closet door and nearly wept. Messy, stinky poop everywhere and judging from Beloved Dog’s hunched and guilty posture, he wasn’t done. I shoved him out in the yard for a good hour.

Then I brought him into work.

Physical exam was about the same – tense abdomen, grunts when palpated, otherwise nothing unusual noted. I did some repeat blood work, and his organ function looked the same as last year.

In fact, strangely similar. His cholesterol was up a bit last year, which often doesn’t mean much. Except a year later, despite having eaten nothing for 12 hours, his cholesterol was, if anything, higher than last year.

So I ran another Spec CPL, to see how his probably-false-positive for pancreatitis was coming along. Now it was 764, instead of 600. I asked the lab to add on a check of his amylase and lipase – two enzymes secreted by the pancreas as well as several other organs during gastronomic upset. They were elevated, too. 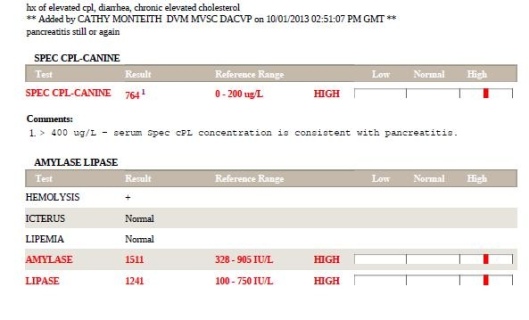 Now, when you look at results like these, it’s very hard not to feel concerned, considering that usually when we see these kind of numbers, the patient is in acute pain and vomiting everywhere.

I called in the ultrasound vet, who kindly came in just for Beloved Dog, carefully looked at all his organs – even his heart – and then only charged me $150 for what was essentially a two-body cavity ultrasound – a $400 value.

His results were interesting, if frustrating.

Those nodes in his spleen are still there. There’s a slight thickening in his duodenum, like corrugated cardboard. He apparently has stones in his bladder – those weren’t there before – but small ones, “not clinically significant”. A possible “mild fibrosis” on his pancreas, not so much indicative of pancreatitis.

“I think maybe it’s the beginnings of a mild Inflammatory Bowel Disease,” said the Ultrasound vet. “It doesn’t look like pancreatitis. Might not hurt to put him on a hypoallergenic diet for a month or two just to see. Sorry I can’t see more.”

Well, at least it’s not cancer.

I took Beloved Dog home and cooked up some freezer-burnt chicken breast and rice and pumpkin for his stomach. Chicken isn’t hypoallergenic, but that was what we had, and at least it’s low fat. He gobbled it and the stools solidified. In fact, once his poops firmed up, they seemed firmer and more regular than when he was on his commercial diets. Has hasn’t had a poop accident in the house all week.

So I thought for a while.

They may not be able to give me a definitive reason for why my dog’s blood tests so abnormally, why it looks like the blood of a dog who is vomiting up all its bodily fluids and slowly wasting away in agony, while he seems fairly normal inside and out.

But my gut is telling me that my dog’s insides, for whatever reason, are not functioning properly. Furthermore, if he DOES have a very low grade chronic pancreatitis going on, one that isn’t visibly detectable, then humans with similar problems report chronic pain.

My dog isn’t digesting things well. He may be in pain, even if he doesn’t really act like it (and THAT, by the way, is why your vet encourages you to bring your dog in once or twice a year, even if you aren’t planning to vaccinate. Because sometimes this stuff shows up on the bloodwork FIRST. How often have I explained that to people? I can’t ignore it or brush it aside when it happens to me.)

My big fear, besides cancer, is that one day all of these little signs that Beloved Dog isn’t handling fat well – elevated pancreatic enzymes, elevated cholesterol- might go from whatever it is now (low-grade pancreatitis? Irritated bowels?) into a full blown case of actute pancreatitis. And dogs can DIE from that. We euthanized one last week.

Meanwhile, on his bland chicken-rice-and-pumpkin diet, he has stopped pooping in the house. At least for now.

So I made a decision.

And so, from now this is what Beloved Dog will be eating:

*DISCLAIMER: I am not a veterinarian. I am only a veterinary technician who works at a clinic that believes strongly in raw and home cooked diets. This recipe is based off of my experience working with those vets. Let it be noted that different things are appropriate for different dogs. A puppy would need more protein and fat than you would find in this recipe, for example. If you want to home cook a diet for your dog, seek out a vet who is supportive of such things and ask their guidance.

I will also need to get a vitamin and mineral supplement to add to each meal, and since it’s so low fat, I may add coconut oil to give him some medium chain fatty acids. But I’ll add one thing at a time and watch his stomach.

It’s going to take me a couple of hours every week to boil up his meat and then plop correct portions into each container. I’ll store them in the freezer and just take out a new one to defrost whenever I feed him a meal. If I get more containers I might be able to do two weeks at once.

I didn’t really involve poor PH in this decision. I think he accepts that I make the health decisions regarding our dog and it doesn’t seem to bother him from a financial standpoint. If we can get meat in bulk from the states than really the monthly cost won’t be too much different from what we were feeding before.

Either way, my dog is worth it. And right now, I feel like it’s the only thing I can really do for him.

24 thoughts on “Beloved Dog, The Reprise – Or, In Which I Take Spoiling My Dog To A Whole New Level”