Karyn Van Der Zwet, who you will see on my blog roll as Kloppenmum, came out with a new book recently, and she kindly sent me a copy to review.

All About Tantrums is probably the only book out there that really is ALL about Tantrums. If you Google books on tantrums you will come up with a lot of books about TODDLER tantrums.

In fact, it gives multiple levels of advice based on the age of the tantrumming person, from 9 months old to teenagers to YOUR AGE. That’s right – her book has sections dedicated to ADULT tantrums as well, and what to do when you have one.

What Karyn does is break down the word “tantrum” into (I counted them) 15 tantrums with 35 sub-categorized tantrum types. And she not only describes what each one looks like and how to tell one from the other, but how to deal with each and every kind.

It sounds like a lot of information, but it’s actually insanely helpful, because I’m betting that every kid doesn’t throw every kind of tantrum. Chances your kid only throws tantrums over a couple of things on the list. And when you realize that you’ve been following generic advice which would work great for, say, an Intentional Tantrum (subtype Entitlement Tantrum), but that your kid is actually throwing a Brain Pain Tantrum (sub type Has To Be Done Tantrum), you realize you’ve been handling it all wrong.

Even if your kid doesn’t throw tantrums, it’s a great explanation of why kids do the things they do.

END_OF_DOCUMENT_TOKEN_TO_BE_REPLACED

I haven’t been posting much, because the whole “I’m tired” thing gets… tiring. It’s been weeks (months?) since I felt the slightest burst of energy.

I start out exhausted in the morning, and I remain exhausted throughout the day, to the point where it seems like an unreasonable effort to have to keep putting one foot in front of the other.

So you’d think that when I tell people that I won’t get tired doing something, they could take that to the bank.

But during my family reunion, when I announced that I wanted to swim across the lake, my family thought it sounded crazy.

Now, I have always wanted to swim across a lake. My uncle had a cottage, and so did a friend of mine in High School, both on lakes. I’d be swimming or lounging on the dock, and I’d look at the line of trees on the other side and think “I can swim that far.”

But people always said, “Oh, it’s farther than it looks. What if you get tired?”

What if I get tired – what a silly question. Swimming has always been effortless for me. Oh, sure, if I swim fast enough I’ll get tired, just as you might get tired from jogging. But then I can just slow down and stop and take a rest. No different from walking, really, except that I am weightless. No sore feet, no hills to climb.

But I never did it, because other people told me I couldn’t. Or shouldn’t.

Now here I was staying on the edge of a lake for a week and the other side was there, taunting me. My family would get in canoes and kayaks and skirt around the lake. They would go on a hike and walk all the way around the lake. So why couldn’t I swim across it? I had always wanted to see if I could swim as far as I thought I could. 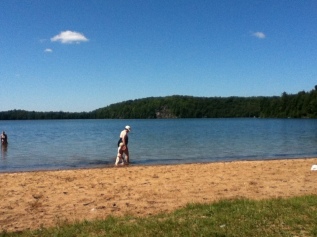 I am 31 years old. How long do we have to be adults before we can start making our own choices? Who could tell a thirty-something, married adult “no”?

Oh right, the people who loved me.

“What if you get tired?”

“Then I’ll STOP and REST. It’s called FLOATING. It’s EFFORTLESS. I’ve snorkled for hours without getting tired. How is this any different?”

“I have never, in 30 years of swimming, gotten a CRAMP. And if I did, I would FLOAT until it felt BETTER.”

Only PH and one of my favourite cousins thought it sounded reasonable and doable.

Finally, I compromised with my parents. They agreed to try not to worry too much IF I was accompanied by PH in a CANOE, with two life vests on board.

We told them to expect us back in three hours. Really, we estimated that I could probably do it in two.

And so we struck out. PH didn’t hover by me, waiting for me to sink. He knew he was there solely for my parents’ peace of mind. He was a dot in the distance at times.

I was fine. I was swimming, and for the first time in my life, I was swimming without any obstacles blocking me. No imaginary perimeter of open ocean to avoid. No end of the pool. Just a distant shoreline ahead of me that looked just as far away after swimming for a good 20 minutes.

I didn’t get tired. A couple of times, as a joke, I stopped swimming entirely. No leg movements. No arm movements. I just bobbed there, head and neck well above the water, while PH and I smirked at each other.

I aimed for the cliff on the far side. The water there was creepily deep and cold and clear, but it was easy to climb out on the rock, and nice and safe to jump off and back into the lake.

I worked harder on the swim back. Neither of us had a watch so we weren’t sure how much time we had taken, and I was in a rush so my parents wouldn’t worry. The wind kept blowing waves that pushed me off course.

I still didn’t get tired, and we arrived back at the beach only an hour and a half after our time of departure.

My Dad was standing on the shore waiting for me to come in. He told me later that watching me swim in he had suffered frequent waves of worry because I kept “disappearing” under the water and then resurfacing.

Owl broke away from the shore to join me in the water when I got into the shallows, and we spent another half hour splashing happily.

Meanwhile PH dragged the canoe onto the shore. “She went down three times. I had to keep fishing her out,” he told my mother, who actually believed him for a minute (to his delighted amusement).

He told me later that I had looked more myself on that swim than I had for a very long time.

I think that’s the last time I didn’t feel tired.

I’ve been meaning to talk about the Fifty Shades of Grey series for a while now, since I’ve finally fought my way through the third book.

Oh dear lord, why is this famous?

I will reluctantly give it this – and those who haven’t read both series may be surprised to hear this – it’s BETTER WRITTEN THAN TWILIGHT.

That doesn’t mean it is GOOD.

“Better than Twilight” is like saying “better than having your eyes removed with a melon-baller”. You could still be referring to a root canal or stepping on a piece of lego in your bare feet.

To briefly compare, let’s go over all the things wrong with Twilight, shall we?

1. Protagonist is dim witted and a terrible person.

2. Protagonist is a weak female who promotes all those unhealthy stereotypes of the fainting, delicate, door-mat princess who tries to look feisty by occasionally having an opinion about her own fate.

5. Cardboard cut-out characters who often act against their directly-described characterization (e.g. a character is described as terse but then goes on long rambling diatribes).

Now, let’s compare that to its spawn, Fifty Shades of Grey (for those who might be unaware, Fifty Shades originated as Twilight fan fiction which took Edward’s creepy bossiness to a whole new level):

1. Protagonist seems aware of her surroundings and doesn’t repeatedly lie to her father, flirt with someone she is uninterested in for the express purpose of extracting information, or blow off people who try to be nice to her.

2. Protagonist is still a weak female who promotes all those unhealthy stereotypes of the fainting, delicate, door-mat princess who tries to look feisty by occasionally having an opinion about her own fate. Also, slight hints at an eating disorder.

3. Love interest is a domineering, condescending, power hungry bad boy who repeatedly puts his own desires first… but at least the protagonist recognizes that this is a problem.

4. Poor plot structure – The first book ends at the climax, and you don’t get the denouement until you pick up the second book. Then a random action sequence is inserted to create further tension in later books but seems constantly tacked-on to the main storyline

5. Protagonist and her love interest are actually surprisingly three dimensional. The rest of the characters are simply extras with no depth, however.

So, as you can see, it is MARGINALLY better.

If you put a gun to my head and said I had to re-read one of these two series, I’d pick Fifty Shades, hands down.

If you want, I can do a Twilight vs Fifty Shades series at some point, although it would sort of be like pitting Cow Pats vs Dirty Diapers.

Anyway, the character of Christian Grey is actually interesting, if not likeable.

But then there’s the unalterable fact that it’s badly written. It provides a hideously unhealthy relationship example – remember kids, if he’s controlling, domineering, and seriously screwed up, you should put up with it as long as he’s good looking and says that he loves you – and it has creepy subliminal-messaging-style references to anorexia.

Check it out (spoiler warning – if one can “spoil” something that is badly written erotica to begin with):

END_OF_DOCUMENT_TOKEN_TO_BE_REPLACED

I want to talk about the awesome week I just spent in Ontario with my mother’s side of the family. I want to talk about potato canons, and drunken mistakes with chinese lanterns, and 1000 piece puzzles, and the weirdness of hanging out with a bunch of cousins who share many of my nerdy ways.

But I can’t get up the enthusiasm because I’m too exhausted.

That week WIPED me. And I clearly didn’t have a lot of energy going into the vacation.

Oddly, the exhaustion is not directly due to the fact that I spent a week in a cottage with 20 relatives.

A significant portion of my mother’s siblings and their children are introverts. So while they enjoyed each other immensely, no one was surprised or disapproving if you wanted to disappear to your bedroom for a while, or take a book down to read at the beach (I walked down to the beach with Owl one sunny morning and found SIX relations reading on lounge chairs and no one in the water).

But I was trying to do several things at once: