Owl is now officially weaned, and I’m not sure he likes it.

We’d been slowly cutting down on the nursing for a while. When he was around 18 months old we stopped nursing on demand. He could nurse in the morning and in the evening and before naps if I was home, but he couldn’t just yank my shirt down. 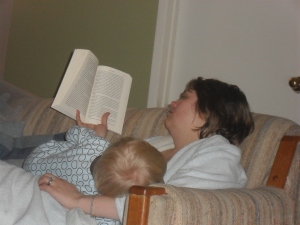 By the time he was two, nap time nurse sessions had been cut even if I was home.

Then, a couple of months ago, he stopped asking for milk before bed. PH had put him to bed a couple of times in a row because I was out training dogs, and Owl didn’t ask and I didn’t suggest it, and that was pretty much that.

Part of it was simply that we were unmotivated to try and wean him first thing in the morning. We were tired and if latching him on would get us another fifteen minutes of rest, we would take it.

But I wasn’t enjoying it any more. My breasts were producing milk but were never full, and Owl’s nursing just felt annoying.

But he wanted it, every morning, and I was reluctant to cut that last string.

Then my mother came for a visit, and that fixed it.

Mum would go to Owl when he woke up in the morning and he would spend an hour or more happily on her lap reading stories or watching videos on her tablet. In fact, if I tried to come into the room he’d shoo me away. “No, that MY Nana!”

And that was that – he was weaned.

But I’m not sure he’s happy about it. He has asked for Mommy Milk a number of times, and even cried for it when he was feeling sick.

He will also just whine for Mommy, even when I am holding him.

It’s heart breaking and frustrating. In fact, it’s a lot like when he was a colicky newborn. I’m giving you what you want – why aren’t you happy?

He also started chewing his nails a couple months ago – right around the time he gave up the nighttime weaning. He bites them right down to stubble, and no matter how much Daycare Lady hounds him about germs or how many times PH and I remind him that he’s giving himself “owies” by doing it, the fingers go back in his mouth.

Lately, he has started sucking on his fingers as well.

I don’t really know what to do about this. When I see it, I feel guilty for taking away his comfort, but after all, I nursed him for 28 months… that’s more than most kids get!

But yesterday, he pulled at my shirt and said “Me baby now,” he said cuddling up. “Me drink Mommy Milk.”

“Mommy Milk’s all gone, Owl,” I reminded him.

And I hope he doesn’t suck his skin right off his fingers as a replacement activity.

15 thoughts on “All Done Mommy Milk”