We aren’t going home for Christmas this year.

Not only is it expensive to do every year, but PH couldn’t get Christmas Eve off of work, and since that’s when his family celebrates, it would be $4,000 for him to miss Christmas anyway.

We aren’t going, even though my parents have decided that they can’t come here, either, which is what they did in 2008 when we were recovering from the costs of our honeymoon.

My Dad’s health is pretty good overall, considering his age and considering the fact that his two older siblings both died of cancer in the last five years. But he’s not up for travelling long distances any more. It’s too much hassle and he would rather spend a quiet Christmas at home. Even if Owl and I aren’t there.

My mother is depressed about it. Dad thinks it’s time that PH and I developed our own family traditions, had a private Christmas together, but my Mum would say “Eff that!” and come in a heartbeat if she didn’t think that leaving Dad and the diabetic cat alone for Christmas was probably wrong.

It’s hard to explain to someone with siblings how close-knit your family unit is when you are an only child. A friend of mine from Toronto happened to be in Vancouver one day so we went to lunch and we ended up talking about it – when you’re an only child, Christmases are quiet and intimate.

People talk about obligatory family spats and awkward moments at Christmas. My ex used to call me in tears on Christmas Day, after his traditional fight with his mother. In blog posts I hear people talk about a family disagreement as if it is as much a part of Christmas as cranberry sauce.

Yeah, I don’t know what that’s about. We have never had a Christmas argument in the history of ever.

In fact, my family’s Christmases are so idyllic that our yearly tree trimming always attracted a few of friends, who enjoyed watching the fire, sipping my Dad’s heavy-handed egg nog, and decorating our tree while Karen Carpenter sang about sleighs and snow.

For the next two weeks my parents would spend every evening sitting by the fire, listening to music, sipping wine and occasionally sighing “what a pretty tree!”

Christmas Eve we would go to the midnight mass and sing Silent Night by candlelight, and then my parents would send me to bed and Santa would come.

Yes, that’s right, long after I achieved adulthood my parents continued to do the Santa thing, because I was still in the place of the child.

Only last year did things begin to change. We got Owl to bed and I participated in stocking stuffing.

This year my parents will just have each other, and since my mother stuffs both sets of stockings, I know she’s going to be bummed right out.

It will be easier on me – I’ll have Owl to think about, and really children are what make Christmas fun.

He’s discovering Christmas, and I love it.

He still doesn’t really understand, though, so we’ll be talking him through Christmas the way we did last year. He understands presents, that’s for sure.

We’re planning a Skype session – maybe if I set up my netbook or my itouch in the right spot, my parents (and maybe even PH’s parents) can watch Owl opening his gifts.

I suspect that won’t be quite the same, though.

Hopefully next year, we’ll be having a White Christmas again. 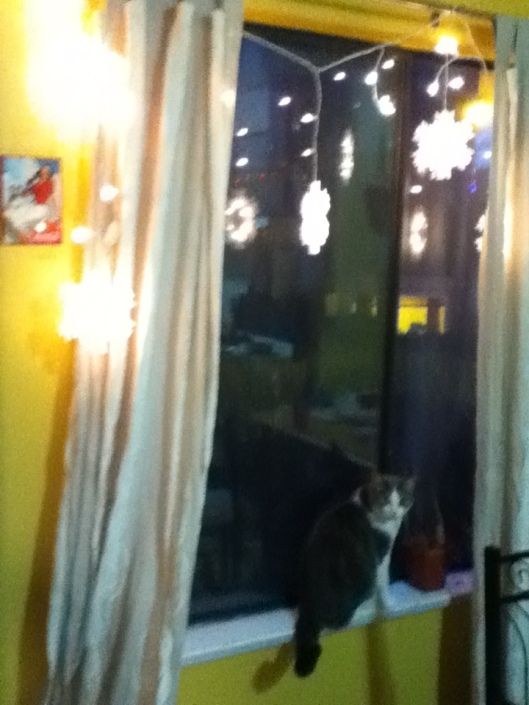