Since this is the long weekend, we have decided to take advantage of three days off to bite the bullet and try potty training.

I’ve spent the last few months reading The No Cry Potty Training Solution, and asking every single parent I know for advice.

My mother has no advice, since I was potty trained by my aunt. I asked her for advice before she died and she said she had just made a big fuss over me – apparently for weeks afterwards whenever I used the potty I would ask “Auntie Helen happy??”

Not Mary Poppins over at Daycare Daze lays out her Smartie method, which she has been using with great success for decades.

Hannah from Hodgepodge And Strawberries has also blogged about potty training, and vehemently expressed her distaste of pull-ups to me over Twitter.

And we’ve spent the last couple of months getting Owl accustomed to sitting on the potty (both a small potty and a potty seat on our toilet) while reading stories.

Once, while running around with no diaper on, he started to pee so we sent him to the potty where he deliberately finished the pee to great acclaim, and he was so encouraged that he did it again a few minutes later.

Our excuses for not potty training him properly were wearing thin.

Ultimately, I was afraid of failure, and afraid of change. I have anxiety issues. Change scares me. Doing something I’ve never done before scares me.

Then I had an epiphany.

I was called to a man’s house to help him deal with his new puppy. He was red-eyed with sleeplessness, and shack-wacky for spending three consecutive days holding his puppy. Every time he put his puppy down the puppy would pee or poop, and he was so anxious over messing up his dog’s house training that he was driving himself insane.

Even though this is the best kind of owner – 100% dedicated to starting his puppy out right – he was thinking of returning the puppy for the sake of his own sanity.

So I stepped in and made him put the puppy down, and as I talked him through the process of interrupting the behavior, moving the puppy to the correct spot, and then rewarding things when done correctly I realized…

…I have TOO potty trained before.

And Beloved Dog was challenging to potty train.

If I could train Beloved Dog, if I knew the steps well enough to walk someone through it and be paid for doing so (he kept the puppy, who is doing much better, and signed on for six more sessions), then I could potty train a toddler.

So I went out and bought stickers and smarties, bristol board for a (very crude)  reward chart, and training pants. 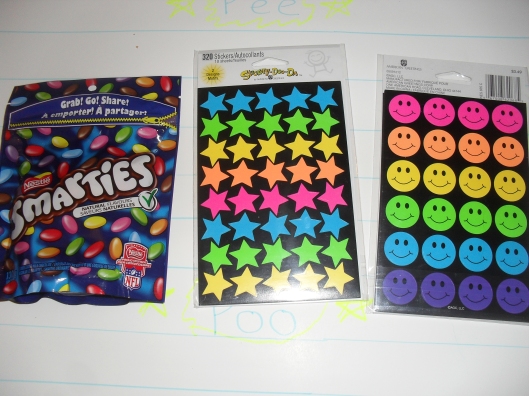 Let’s DO THIS THING.