So, I was trawling through Netflix on my day off and spotted Milo and Otis.

Admit it, you think about it every time you see a pug, and you can’t hear one of those names without thinking of the other.

I adored the movie as the kid. It had talking animals and British accents, and who could ask for more?

Plus, I loved that it gave such a… graphic depiction of live mammalian birth.

Nothing like a bit of sex ed in your children’s family viewing.

I’m starting to keep an eye out for movies that would be good for Owl to watch when he’s older, so I pressed play.

Aw, it’s so cute! With the British voices, and little animal antics! How did they get that mother cat to swim after her kitten like that?

After twenty minutes I turned it off because… I was beginning to feel disturbed.

I was in TV commercials and made-for-tv movies as a kid, so I had an enlightened attitude of what goes on behind the making of a movie.

If anyone had pointed to Milo And Otis and asked me “is that real?” when I was small, I wouldn’t have had the problem with that question that many younger children do.

Ironically, that’s probably part of what protected me, although I’m sure the reason that myself and all the other kids sat through this movie so happily was simple lack of reflection.

When I watch the movie now, I realize that it is far too horrifyingly real.

By the time I turned it off, I had watched a cat attack two baby birds, get pinched by a crab and a crayfish, a dog attack a frog, a drowning pug being batted about by a BEAR, and then a crying kitten go OVER A WATERFALL in a box.

And then you start to remember the movie a bit.

Wait, doesn’t this cat later fall off a cliff after being attacked by seagulls? 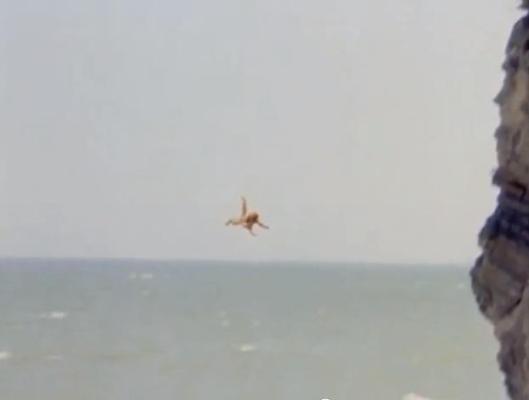 Well, I’m sure the cat was a cliff jumper before this video was made, right?

You don’t think about it as a kid, even if you’re a kid who has been used in filming and knows how contrived it all is.

Milo and Otis gives you the feel of the camera man just having shot hundreds of hours of footage of pugs and tabbies playing, and then making a movie out of it.

One of the things I really liked about it as a kid was that it featured real animals, doing real animal things.

It isn’t like some of those other kids movies where the mouths are made to move in a creepy way, or the animals are clearly responding to a trainer’s direction off-screen (I was hyper-aware of this sort of thing as a kid, and could tell when they switched animal actors, and was alert to where the trainer must be).

Milo and Otis felt more like a documentary, less contrived…

But when you watch it, you realize – it is contrived in all the wrong ways. Because while, yes, it shows a kitten exploring a farm, that kitten probably did not go over the waterfall as part of its natural explorations. And it certainly didn’t just decide to wander off of a cliff when cameras were positioned just-so.

Nor is it like in Homeward Bound, where you see a close up a of a swimming cat, and then something indistinct going over a waterfall.

Or like in another favourite of mine, a documentary/comedy called Animals Are Beautiful People, which shows encounters between predators and prey… but rarely shows both predator and prey in the same shot, making me realize that they had to simulate a lot of this behavior with sneaky cuts.

That’s an actual cat, going down an actual raging rapids, while crying pathetically. 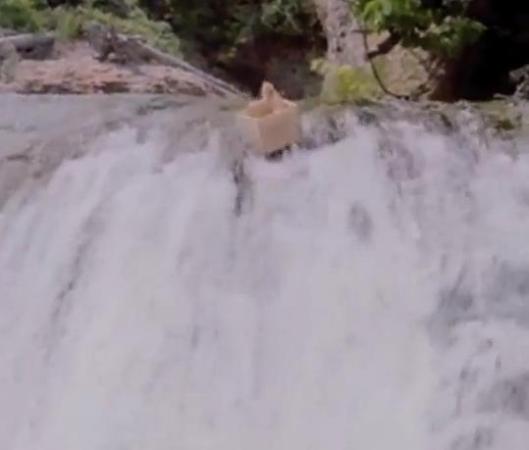 But I’m sure they probably called in a stunt-cat.

And yes, that is an actual cat, shown in heartbreaking slow motion, plummeting into the ocean from a cliff that must be at least 30-50 feet high.

Notice that the cat is backwards, facing the cliff he supposedly jumped off. By which I mean, facing the person who must have hucked him over the side.

So I got on IMDB.

They cut it up, added some new footage, cut out a lot of other footage (like this bizarre scene where Milo and Otis reflect on death), hired Dudley Moore to do a voice over, and then raked in the cash.

There’s no notation from the Humane Society about filming, because it was filmed in Japan.

Japanese Animal Rights groups claim that 20 kittens died in the making of this film, mostly while being tossed off cliffs. But there’s no proof, because obviously the film makers aren’t talking, and there was no animal rights supervisor on set.

This online video review of Milo and Otis has some clips from the Japanese version, though, and they’re pretty distressing.

Here’s the original version of the bear fight:

I won’t even show you the cat-trying-to-escape-the-ocean bit. Watch the linked review above for that.

What really hurts me is that I’m always so careful to stay away from these kinds of films.

Because animals still die in filming of these adorable little children’s flicks.

Ask anyone in Vancouver who knows anyone who was involved in the filming of Snow Buddies, one of the Air Bud direct-to-video barf-fests. Five puppies died in the making of THAT film, though that was due to poor care and disease, not through being tossed off of cliffs.

So, while I would naturally avoid exposing my child to drek like Snow Buddies, I had hoped to show him Milo and Otis. I mean, Dudley Moore does such a brilliant job with the voice over. Remember the goofy fox? Awesomeness.