Every year we go to the Fair at the PNE (Pacific National Exhibition).

It happens in August, and I remember going the day before Owl’s due date, so it really helps me mark the years. Last year Owl was a somewhat passive participant, although he enjoyed patting the slimy cow noses.

He still loves that part.

But this year was even better.

He had a blast, extrovert that he is.

Plus, I discovered that a friend of mine had decided to go with her family the same day, so we met up. She directed me to a section that I didn’t even know existed, where there they had a competition for best playground set-up.

Owl revelled in the ball pit (of course), and then in the hexagonal play house with the slide, and then he disappeared into this crazy rabbit-warren of construction where he (according to my friend’s teenage son, who attempted to follow him) “took ridiculous angles”. 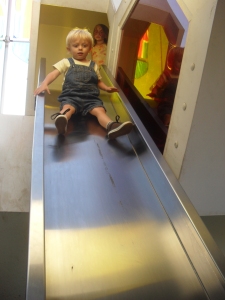 Basically, he ran totally amok, ate all my popcorn and generally had a glorious day.

Now we just have to help him understand that he has to wait until next year to do it all over again.