Most of my experience with teaching and training beings whose brains are smaller than mine has been with animals. Furthermore, in most scenarios Owl acts and responds very much like a dog and so I treat him very similarly most of the time.

I use redirection, positive reinforcement, a high-pitched, encouraging tone when I deal with him, and it seems to work. He responds well to praise, touch, and food rewards. He likes to fetch.

So I am amused and delighted when Owl displays human-like abilities that are beyond the grasp of the dogs I have worked with.

Like when he was 14 months old and I realized that he understood that he was looking at himself in the mirror.

I pointed to his reflection and said “who’s that?” and he pointed to himself! To test his understanding, I secretly placed a banana sticker in his hair and showed him his reflection. Sure enough, his hand crept up to his hair while a perplexed look appeared on his face.

Dogs would NOT get that.

Also, I am constantly surprised by not only the extent to which he imitates us, but the extent to which he understands what he is imitating. Like at Hallowe’en, when he had just learned to walk, and he spotted a candy wrapper on the ground. He picked it up and toddled over to the cupboard under the kitchen sink, and proceeded to try and open it to throw away the wrapper.

A dog can learn to put something in the garbage if you teach him, but it would never occur to him to see something like a wrapper, identify it as garbage, and then try to throw it away himself. Hypothetically you could teach a dog to recognize certain things are garbage to be thrown away, but it would be a lot of work.

Your average dog does not watch you do something, intuit the intent behind your action, and then try to do it himself.

Owl does this every day. 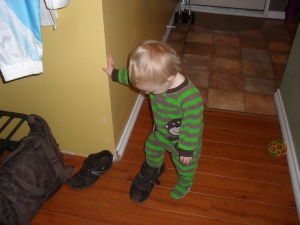 Then there are other things that I almost don’t notice until I think about them.

For example, every morning I ask him to choose his footwear for the day. He can pick his wading boots, or his little doc-martin style boots. No matter which he chooses, he always brings me a matching pair. He has never brought me, say, one wader and one doc martin.

It’s the same thing when he brings me my own footwear (yes, I get my baby to fetch my shoes. I told you he is very like a dog…). He never brings me one sneaker and one boot. He brings me two sneakers, or two boots.

Again, a dog would have difficulty with that. He can fetch your shoes, but you’d have to formally train him to understand “fetch my sneakers” vs “fetch my boots”. It would take WORK.

But Owl does it as a matter of course. Humans are clever.

And the way he generalizes! I made the mistake of teaching my dog to chase my ex-boyfriend’s cat under the command “get the cat”. When I got my own cat, that command didn’t work, because he didn’t understand that “cat” meant any cat other than ex-boyfriend’s cat. We had to teach him our new cat’s name, instead.

But the baby understands categories easily. When he was 12 months old I could say “where’s Beloved Dog?” and he would point to Beloved Dog, meanwhile identifying him as “dog”. Ditto for the cat. He knew that we had A DOG and A CAT but that they each have their own unique identifiers as well.

We taught him what a hippo was, and from then on he could identify all sorts of hippos in all sorts of books, even drawn by different artists. No dog could do that!

"hippo" is one of his favourite signs

Then again, Owl’s capacity for self-control, maturity, patience, obedience, following basic instructions, and potty training are completely eclipsed by our dog, and certainly his capacity for destruction rivals any dog I have ever met.

So I am putting him to the ultimate test.

I am going to try to teach both dog and Owl to read.

At least, not as those who use the alphabet would consider to be reading (Owl is trying to teach himself the alphabet, but has difficulty after “D”…).

I made Owl flash cards 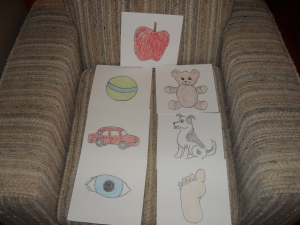 some of his favourite things

I’m going to do the same with Beloved Dog. I borrowed flash cards from my friend and business partner who swear up and down that she has seen dogs learn to recognize words like “sit” and “down” and differentiate between them.

Just to be clear:

I am NOT pushing, pressuring, or otherwise making this un-fun for Owl. It’s just a game, something I am interested in to test his capacity for generalization and symbolic representation. I don’t believe that it will aid his development or help him school in the future.

I’m just pitting him against the dog.

(I’m so going to get trolled…)

Which one looks smarter to you?

16 thoughts on “I Keep Thinking He’s A Dog, But Owl Thinks He’s People”