Someone on my Facebook recently posted that they had overheard this spoken in a comic book store:

Asking us why we don’t watch The Big Bang Theory is like asking a self-respecting gay person why they don’t watch Will and Grace.

I’ve tried to like The Big Bang Theory. I really, really have. Perfect Husband and I keep tuning in and trying to make it through an episode. So far our record is three in a row during a marathon before we tapped out.

The Big Bang Theory Has Some Good Points

I love the character of Sheldon, who clearly has Asperger’s syndrome but is coping beautifully with it. He’s the only character who actually seems comfortable with who he is, and I find him the most believable personality, even when he’s being completely outrageous. Pretty much all of the show’s best lines come from him, too. 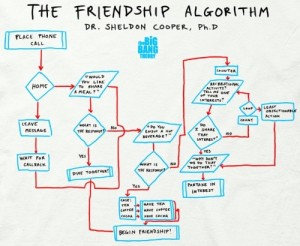 Even better, they actually do hire scientists to write certain parts of the script, so the philosophical nerd banter, the equations scribbled on the blackboards, and most of the references are completely accurate, putting shows like CSI to shame with their actual correct use of SCIENCE.

The show is filled with little Easter Eggs that only real nerds/scientists/geeks would pick up on, and jokes that laymen wouldn’t get.

And PH and I do guffaw at all of those little moments that are clearly aimed at amusing the geeks out there:

Why did the chicken cross the Möbius strip? To get to the same side.

A neutron walks into a bar and asks how much for a drink. The bartender replies, ‘For you, no charge.’

Oh, he dressed as The Doppler Effect for a costume party!

I know what those things are and so I shall giggle in glee because I feel so clever for getting their oh-so-nerdy jokes!

All geeks in this family.

But that’s what it comes down to – even those delightfully nerdy jokes just leave us feeling dirty and used, because we know that those jokes are the result of Chuck Lorre and company trying to butter us up.

If We Laugh Maybe It Will Hurt Less

The whole show is just so calculated that it makes us throw up in our mouths a little bit… or should I say “engage in emesis which we retain within our oral cavities”? That’ll cue the laugh track for sure.

That laugh track is the first of the many things that ruin The Big Bang Theory for us. It is constant, intrusive, and worst of all – it sends a disturbing message about what the producers actually think qualify as punchlines.

And I have to say, most of them are not clever science puns.

Here is a sample of dialogue from an episode that I started but couldn’t stomach for longer than 10 minutes:

Sheldon: So, what time does the costume parade start?

Sheldon: Yeah, so the judges can give out prizes for the best costume: most frightening, most authentic, most accurate visualization of a scientific principle…

Penny: Oh, Sheldon, I’m sorry, but there aren’t any judges or parades or prizes.

Sheldon: This party is just going to suck.

Howard: And I’ve got a handful of pixie dust with your name on it.

Sheldon: Yes. It’s the apparent change in the frequency of a wave caused by relative motion between the source of the wave and the observer.

Penny:…Oh! Sure, I see it now, the Doppler Effect!

Sheldon: See? People get it!

Here’s the thing – even if I forgive the existence of the laugh track, which I have for some shows (I’m an inveterate Friends fan and they have an intrusive laugh track, too), I am irked by what the producers have deemed funny.

Here is what tends to cue the laugh track:

In fact, those above five points could pretty much describe the basic plot line for every show, and that’s what I can’t handle.

Who’s Laughing At Who?

On the one hand: If the show is meant to mock nerds rather than cater to them, then why would they put in so many Easter Eggs and little in-jokes that only true nerds really get? Why would they spend so much time and effort making sure that their math and their science was accurate?

So surely they intend this show to be aimed at geeks, with characters the geeks can relate to.

If we are laughing WITH the characters, then why does every science term or mention of a comic book/science fiction show/fantasy novel get a big laugh? Why is an explanation of the Doppler Effect hilarious?

And if the show is meant to bring geekery to the common man, why do they make it so unenviable?

The characters are walking amalgams of every single nerd/geek/dweeb/gamer stereotype there is.

They are socially inept and useless with the opposite sex, from Raj who can’t even speak when a female is in the room (most inconvenient trait for a sitcom character EVER) to the complete sleazeball Howard to asexual Sheldon. They all have dominating, unintellectual (and often religious) mothers from whom they are still trying to successfully de-parent. They are completely oblivious about pop-culture, lack the basic social graces, and treat women like they are foreign species.

This is the geek equivalent of putting someone in blackface and calling him “Sambo”. It’s plain offensive in its complete disregard for, oh, you know, REALITY, and its blatant pandering to all preconceived notions of nerdiness.

I am also bothered by how they lump all forms of geekery together. The physics nerds CAN also be D&D nerds, but the two don’t inherently go hand in hand. In fact, most gamer/comic/fantasy geeks are arts students who couldn’t tell Lysine from Glutamine if their lives depended on it. Some, like PH and I, span the spectrum, but many do not.

All nerds seem to be one and a same to the producers of this show: LOSERS.

So even when I laugh at one of the jokes they have aimed at me, the loser, I cannot enjoy it fully.

Calculated To Amuse And Offend Equally

I feel like the producers are playing to both sides of the fence.

They put in those Möbius strip jokes to amuse the nerds (“I get that math joke, yay me!”), and they pander to geek interests (“hey! They referenced my favourite comic book character! I love this show!”) but they also portray the characters as socially inept losers so everyone else can have a good laugh at their expense:

Sheldon: I need your opinion in a matter of semiotics.

Sheldon: Semiotics, the study of signs and symbols. It’s a branch of philosophy related to linguistics.

Penny: Okay, sweetie? I know you think you are explaining yourself, but you’re really not.

In a way, that above exchange is brilliant.

Those of us with two brain cells to rub together are feeling good about ourselves because Sheldon’s sentence is perfectly comprehensible to us and that makes us feel intellectually superior to Penny.

The dimmer bulbs get to laugh with Penny and feel good about themselves, because clearly Sheldon is being a wacky incomprehensible nerd so let’s laugh at his failed attempts to communicate with us while identifying with the pretty girl!

No matter what the laugh track is roaring over, I end up disliking the show further. The jokes that are aimed to make me feel clever just make me feel used, even as they amuse me, and the jokes that mock/stereotype the things/people I care about make me feel insulted and marginalized.

Often, they cleverly manage to kill both of those birds with one stone, delighting me by showing the characters talking about or doing something that I do, and then BASHING it just as I am beginning to open my heart to Chuck Lorre and his ilk.

Raj: I don’t know if I want to play any more.

Sheldon: Because you don’t have a girlfriend? Good lord. If that becomes a reason not to play Dungeons and Dragons, this game is in serious trouble.

I want to go and thump Chuck Lorre on the head and tell him that smart people are not inherently losers. Liking Tolkien or Star Trek does not mean that you can’t talk about sports or maintain a normal and healthy romantic relationship. PH is proof of that.

Listen, I’ve played D&D (And by the way, as an aside, no one CALLS it Dungeons and Dragons. It’s D&D. While we’re on the subject, no one ever talks about the “Dungeon Master” either. It’s the DM, or, more recently, the GM) for years with several different groups of people, most of whom are into Star Trek, Tolkien, and comic books…

Surprise, Chuck! Women are geeks too! AND, believe it or not, those women are not immediately identifiable by their glasses and dowdy cardigans.

Let’s look at some of the women from this show:

If Only It Sucked A Little Less

If the characters on the show were admirable people, I would love the show.

If the characters reminded me of people I know in real life, I would love the show.

If there were women who were main characters in their own right, and not just introduced as potential love objects for the dweeby men, I would love the show. But Chuck Lorre knows that his audience would be cut in half by doing so.

Shows that nerds really love, like Better Off Ted and Firefly (with the possible exception of Dr Who) don’t do as well, because they aim at entertaining the geeks, instead of mocking them. Other shows just market themselves directly to the geeks online, like Journey Quest and Dr Horrible’s Sing-Along Blog.

The Unthreatening Stereotype To The Rescue

Ultimately, I think that The Big Bang Theory is very much like Will and Grace. Will and Grace popularized homosexuality in the media by exploring the personal lives of several entertaining gay characters. The world tuned in to mock them, and grew to like them. The result has been increasing popularity of gay-themed television shows, some of which are genuinely good.

Will and Grace did a good thing, even if it did feed into stereotypes and laugh at as often as it laughed with the characters.

I think The Big Bang Theory is doing the same thing – and if it is getting science and fantasy and general geekiness out of the closet, then great.

But I can’t watch it, and it still raises questions in my mind:

Does the fact that this show is popularizing the previously marginalized world of science and comic books make up for the offensive stereotyping? And is it really making people more positive towards geeky things? Or is it just perpetuating the stereotypes?

Though I have to say – Sheldon ALMOST makes it worth it.

12 thoughts on “The Big Loser Theory”