I have an update on the sleeping situation, as well as the next Twilight post, coming down the pipe, but today Babby is 11 months old, so I want to talk about that.

ELEVEN MONTHS? WHAT THE HELL?

WHERE DID THE TIME GO??

WHAT THE HELL AM I GOING TO DO FOR HIS BIRTHDAY???

HOW CAN HE EVEN HAVE A BIRTHDAY; HE’S JUST A NEWBORN BAAAAAAAAAAAAAABY!

Good news: The sign for milk has reappeared with avengeance. Babies are strange.

He had a well-baby this past month and we discovered that he is 18 lbs, and still in the 15th percentile for weight. That’s good, it means he’s holding his own. Maybe not making any insane strides in the weight department, but growing at a normal pace.

His length is dirt-average, coming in at 50th percentile.

His massive melon head is in the 85th percentile. 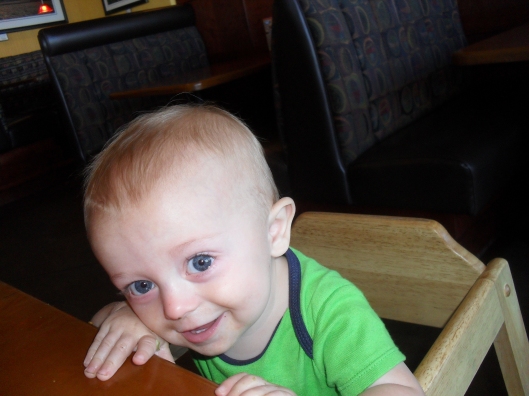 So basically, he has a skinny little body under a massive head. Like a lollipop. Or a bobble-head toy.

It means that one friend’s 3 month old is only 3 pounds away from surpassing my nearly-one year old, and another friend’s son has left Babby in his dust, by hitting 19 pounds at the 6 month mark.

But don’t we all wish our babies could stay small for longer? So I don’t mind.

But holy crap, I need to do something for his birthday, and I have no clue what to do.

If he were older, I would throw a kid-centric party at a local indoor play place, or perhaps a miniature train ride place or similar. But Babby isn’t really old enough to enjoy play grounds, and most of my B.C. friends don’t have kids, so it would mostly be a bunch of adults standing around in a place that had far too many clowns on the wall for any normal human to feel comfortable.

So then I think about throwing a more adult-centric party, because after all, isn’t this more a celebration of PH and I surviving the first year than an actual party for Babby? HE doesn’t know that he’s going to be a year old.

But some of my friends do have small children, and it seems weird to throw a first birthday that is absolutely no fun for kids.

Then there’s the matter of sheer volume of guests.

I’m the sort of person who likes to have one cohesive group of friends whom I see regularly. However, between my friends from my old work, PH’s friends from his old job, a fight between those friends from PH’s old job (resulting in half of them not speaking to the other half, and us caught in the middle), and a couple of old friends from our university days who now live out this way, we have multiple groups of friends, some of whom don’t know each other, and others who (even more awkwardly) aren’t speaking to each other. All of these friends fawn over Babby and would expect to be invited to his birthday.

Oh, and neighbours who invited us to THEIR son’s first birthday, and are expecting us to return the favour.

Luckily, Babby never seems to get overwhelmed or overstimulated by large numbers of people. He thrives on it (how did we end up with an extrovert? HOW?). So despite the baby-book warnings of keeping parties small, Babby really wouldn’t mind a massive party.

Problem: Our living room is tiny. We had seven friends over last night and you couldn’t walk through the room comfortably once everyone was sitting down. Legs everywhere. A part with

Our complex does have a “party” room, which is really just a big empty room near the pool with a playground outside. We could reserve it for the day, open up the doors, and let everyone come to us. The kids could play in the pool or the playground, and the adults could stand around and talk.

But then that leads to awkward standing-around-and-making-conversation situations, which, as an introvert, I find exceedingly trying. I would probably spend the whole time stressing over whether everyone was having a reasonably good time, and trying to share myself around between three or four different groups of people, who would probably be standing around in odd bunches.

Or we could reserve a table at a local restaurant. Babby loves eating out, and is always well behaved. It would put a set time limit on the party (long enough to eat), and people would be able to just sit down and converse with their neighbours.

That would be good.

But that isn’t much fun for the few kiddies (average age about 4) who would probably attend, and then what about cake and presents? Would a restaurant let us bring in a separate birthday cake?

Oh, and as a separate issue, as he approaches one I am finding “Babby” to be a less and less appropriate nickname for him. I think I need to either out his real name, or adjust to a more personality-based (as opposed to age-based) handle for him. Any thoughts? Suggestions?