The following are excepts from the first chapter of my elementary school masterpiece, Follow the Animals Home. I am sure you will be overawed by my amazing writing ability. By which I mean, my ten year old self almost makes Stephenie Meyer look good.

I have transcribed it exactly as it was written, typos and all. I cannot recreate the MS Write dot matrix printer look of the font, though. 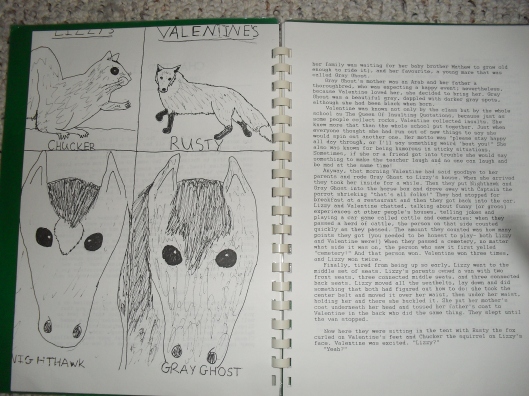 so here's a screen shot.

Valentine had a red fox named Rusty she had acquired on a trip to England one year, a brown and white guinea pig that you won’t hear enough of to get to know (but that is just as well, because all it did was shriek), a border collie named Zippy, her father owned a large black Newfoundland dog called Splash, two cats, a gray tabby and an orange tabby named Cloudy and Marmalade, five horses, a welsh pony and a shetland pony (actually, to be accurate, it was an old one of hers but her family was waiting for her baby brother Mathew to grow old enough to ride it), and her favourite, a young mare that was called Gray Ghost.

Gray Ghost’s mother was an Arab and her father a thoroughbred, who was expecting a happy event; nevertheless, because Valentine loved her, she decided to bring her.

How’s that for a Meyer-worthy run-on sentence? Not to mention a good comma splice. It goes on like that for a while. Then it says,

They had stopped for breakfast at a restaurant and then they got back into the car. Lizzy and Valentine chatted, talking about funny (or gross) experiences at other people’s houses, telling jokes and playing a car game called cattle and cemeteries: when they passed a herd of cattle, the person on that side counted quickly as they passed. The amount they counted was how many points they got (you needed to be honest to play- both Lizzy and Valentine were!) When they passed a cemetery, no matter what side it was on, the person who saw it first yelled “cemetery!” And that person won.

The chapter concludes with:

Although it was August, the nights were cold and the dew plentiful. Lizzy and Valentine sat down on the wet grass.

“What should we do?” asked Lizzy.

“Why don’t we plan our day tomorrow?” suggested Lizzy.

“Yeah! Uh let’s see……. I know tomorrow the very first thing we’ll do is wake up!” Lizzy joked. They laughed.

“Yeah, then get dressed and have breakfast….”

“Feed the animals, brush the horses then…” Lizzy trailed off.

“I was just thinking that!” said Lizzy.

Just then Lizzy came up with a brainwave. “Why don’t we go picking after? That was if we don’t find any animals the berries will soothe our feelings”

“Good idea.” Then they entered the tent and, despite the wet pyjamas, promptly fell asleep. It had been one busy day.

7 thoughts on “Chapter One: One Busy Day”