WARNING: If you haven’t read the Harry Potter books, this post won’t make a lot of sense. On the bright side, it doesn’t contain many spoilers, so you can feel free to try and read it anyway.

It wasn’t an intentional gear-up for the upcoming movie, since I have found the last two movies disappointing anyway and am now just bracing myself for further sorrow. I just like to read through the series because the books are damn good, and I often do it once or twice a year.

I’ll be making a Rowling vs Meyer post soon, once I’ve done the Breaking Dawn post, so you can wait until then to hear me explain the excellence of Harry Potter in excruciating detail.

My point is, I’ve reread the books and I have been thinking more about what house I would be in.

I long ago decided that I would probably be in Ravenclaw.

I am a bookworm, was an achiever in school, and I’m a coward, so you know I wouldn’t be in Gryffindor. I certainly value “wit and learning” as well.

I feel that it only underlines my point to let you know that as a gift several years ago, PH presented me with a copy of Harrius Potter et Philosophi Lapis, which is written entirely in Latin, and I thought that was AMAZING.

I read JK’s description of the Ravenclaw common room  in Deathly Hallows with avid interest (get it? “Avid”? Sounds similar to “Avis” which means bird, and birds = Ravenclaw? I’m SO WITTY).

I am delighted with the description of the airy tower room and star-spangled ceiling and especially with the “spectacular” view of the mountains (I’m a sucker for mountains – why do you think I live in BC?). I am happy to imagine myself living there as a Ravenclaw. I can’t wait to see it in the movie, and I hope they do it justice.

Although it’ll be at night, so I’ll miss the view.

I always have a bit of a nagging doubt, though, that I might have been in Hufflepuff.

Hufflepuff is supposed to be the bastion of the left-wing, loyal, true-blue types. Anyone who knows me will tell you that I am what my D&D friends call “Lawful Good”. 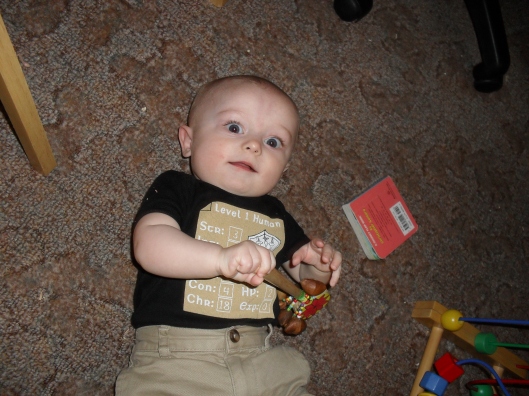 That's right, I play D&D and dress my baby in stuff like this. WHAT OF IT?

I hate breaking rules, I would never cheat, and I always always try to do the right thing.

There’s nothing wrong with being in Hufflepuff, is there?

I mean, sure, as Hagrid says, they have a reputation for being “duffers”, but it isn’t uncommon for people to mistake “good” for “stupid”, and really, goodness is more important than intelligence (it’s a shame that Bella Swan has neither).

I have always thought of myself as a relatively intelligent person, but living with PH, Mr Mensa, makes me feel like a twit a lot of the time (Perfect Husband also labels himself a Ravenclaw, for what I hope are obvious reasons).

So now I am imagining myself being the biggest loser in Ravenclaw, completely stumped by the riddles required to get in and out (how much must it suck if you’ve forgotten a book for class and then you can’t figure out the riddle to get back in? I bet people hold doors open for each other a lot). I’d have to hang around and wait for Luna frigging Lovegood to let me in. I’d be like the Neville Longbottom of Ravenclaw.

And while a description of the Hufflepuff residence does not exist within Harry Potter canon, JK has said in interviews that it is in the basement, near the kitchens, and that it is “a very cozy and welcoming place, as dissimilar as possible from Snape’s dungeon. Lots of yellow hangings, and fat armchairs, and little underground tunnels leading to the dormitories, all of which have perfectly round doors, like barrel tops.”

It sounds adorably like a hobbit-hole, and who wouldn’t want to live in a hobbit hole?

It wouldn’t be so bad to be a Hufflepuff. There’s no shame in being honest and good and living in a hobbit hole. And maybe I’d be the smartest one in there, instead of being the thickest Ravenclaw.

Besides, there’s that insane staircase to think about, going up to Ravenclaw tower. Hmm.

The problem is that I am a massive intellectual snob. I don’t think any of you, having read my Twilight critiques, could argue that even if you wanted to. Whether or not Hufflepuff deserve their reputation, I don’t know if I could handle being saddled with it. That’s probably wrong. That’s also Ravenclaw.

Besides, if the Sorting Hat gave me a choice, you know which one I’d choose.

So I think I’m safe in calling myself a Ravenclaw, lest I ever wake up and discover that I am a child again and somehow living in a British writer’s imagination (it’s important to be prepared for such possibilities, you know).

…As a final factor to consider, I suspect that if I were actually a Hufflepuff at heart, I probably wouldn’t find this so frigging hilarious:

UPDATE: I’ve taken some online quizzes and come up with “Ravenclaw” every time, so I feel reassured. I liked this one the best, because it didn’t have many obvious grammatical errors and it didn’t ask obvious questions such as “what is your favourite Hogwarts subject?” followed by the subjects taught by the four heads of house.