While we were in the United States, we stopped at Target, because that’s what Canadians do when they are in the States.

“You know what I always hope to find, but never do?” I told my friend as we shopped. “Perfect Husband doesn’t think they make them any more, but I always look anyway. They’re a Planters product, and they were called Cheese Balls. We used to eat them all the time when I lived in the Caribbean, and they were so good, and I can never find them.”

“I remember those!” she said. “They probably did take them off the market. They were probably full of poison or something.”

“I distinctly remember “yellow number 5″ being one of the ingredients,” I admitted.

Our conversation turned to other things. As we passed the junk food aisle I said casually, “I’m just going to wander through here.”

No one was more surprised than me when I actually found them.

Granted, they weren’t Planters brand, and there was only one container left, and the container was, er, a little large.

But there they were:  “Cheese Balls”.

So I bought them. 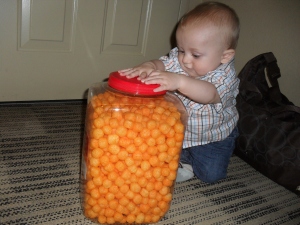 That's right. My baby had to kneel to get his hands on the top of this MASSIVE JAR.

Can you blame me?

Yesterday was the strangest “interview” I ever attended.

To be fair, I knew going in that it was not an interview so much as some kind of group testing. I figured it would be one of those fill-in-the-bubble tests with questions like “have you ever told a lie?” and then if you answer “no” they know that you are a liar.

The night before I wondered aloud if I should be boning up on basic animal care stuff, since the “test” was for a position working in an animal shelter (for HELLER good pay – 22 bucks an hour!). But everyone poo-poohed that, saying it would be standard pre-screening psychology stuff.

So I was a little surprised at what I actually got.

They led me into a room filled with desks and women. Each of us had our own desk, and were provided with a pencil, a pen, and an eraser. We were told that extra paper was available if we needed it.

Is this a job application, or a class??

Anyway, I didn’t really care. I’m good at test writing and the questions were fairly simple, although of course I am only guessing at what answers they are looking for. I have always tailored my answers to my professor, knowing the prof’s little quirks and odd opinions. This was completely blind, though.

For all I know, when they asked me for the symptoms of kennel cough, they were looking for an answer of “purple and green spots, a hoarse singing voice, and a tendency to dress in rubber bondage wear.”

On the other hand, considering that this job ad didn’t require any specific education (like my tech diploma) I bet they did weed a lot of people out. But surely more specific credential requirements would have done the same thing?