I’ve been meaning to write this for a while. We’ll see if I can do it with this puppy tied to me, alternately chewing on her bully bone and yelping in my ear.

When we went to Nova Scotia I gave disposable diapers another chance.

I put my cloth diaper service, Happy Nappy, on hold while I was gone and went off to the plane with some disposables left over from a diaper cake that I received when Babby was born.

By the time we landed in NS, Babby had had three clothing changes. The first happened in the airport, because when we arrived we discovered that he was already soaked in urine. This turned out not to be the diaper’s fault. PH, bleary eyed at five in the morning, diapering Babby in the dark, and unaccustomed to disposables, had accidentally put the diaper on backwards.

Kind of thing that could happen to anyone, I’m sure.

So we put a new diaper on, frontwards, and dressed Babby in dry clothes.

Half way to Toronto I discovered that Babby’s back was covered in poo. I did a full diaper change (which was not a ton of fun in a airplane washroom) and washed all the poop off of Babby’s back, and dressed him in yet another set of clothes.

The next couple of diaper changes were just pee, so they were fine.

Then, not half an hour before landing in Halifax, I went to change Babby’s diaper and discovered… you guessed it… poop up his back.

Another set of clothes. Good thing I came prepared.

The poop-up-the-back scenario repeated itself on a nearly daily basis during my time in NS. I tried a couple of different brands, to no avail.

The most dramatic event happened while I was in Halifax for the day. I planned to visit Hodgepodge, then visit Perfect Girlfriend at her work, visit my old coworkers at my old work, and then have dinner with my cousins.

So there I am, hanging out with Hodgepodge, while Babby plays with the world of toys in her play room and squeals delightedly at the kids around him. He pushes himself to sitting from his stomach for the first time while we chat, and I am very proud of him. He starts to fuss so I pick him up and nurse him. When he finishes I sit him up, and realize that there is poo on my hand.

The poo, I quickly discover, came from under his shirt. I lift the back of his shirt and discover that it is all up his back – again – and now it is on my hands. I swear, lift him up, and realize that there is poo on my pants, where he lay as he nursed. On, and on my shirt, as well. Oh, and on my cell phone.

This is, by no means, the worst poop incident I have ever dealt with. I said before Babby was born that after dealing with dogs, no poop would faze me, and I stick by that assertion. But on the other hand, I do object to being on a day trip to the big city only to discover that I am covered in poop from head to toe, and realize that while I brought changes of clothes for Babby I brought none for myself.

Did I mention that the poop was a bright Babby-had-scrambled-eggs-for-breakfast yellow? With that squirty, squishy consistency of a still heavily breastfed baby?

Hodgepodge, who runs a day home, was completely unfazed and helped me clean Babby and myself up as much as possible. My pants were dark, so once wiped the poop stain wasn’t particularly prominent. But my blue shirt did not merge well with baby poop stains.

So now I had a clean baby, cleanlooking pants, a cell phone that only had some minor yellow poop drying in the cracks, and two prominent yellow poop stains on my shirt – one over my boob and one over my stomach.

Hodgepodge raided her closets and found me a baggy white t-shirt to change into, which I did gratefully. Now that the postal strike is over I need to get my mother to mail that shirt back to her.

I then left to go visit my coworkers and my best friend in a baggy white t-shirt. While at the mall I bought a new shirt just so I could go to dinner with my cousins without feeling like someone who was pooped on that morning.

…It came down the legs, instead. 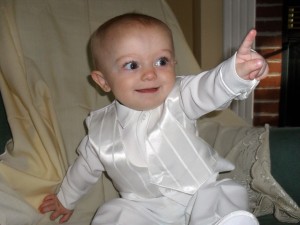 At least this outfit didn’t get poop stained until AFTER the service!