It’s so hard to tell what makes a tiny baby cry. But he wakes up out of a sound sleep with a painful cry, again and again and again throughout the night. Sometimes he’s just screaming in his sleep and if I count to ten he subsides back into a worried slumber. But most of the time he just starts to wail. We’ve tried Tylenol, to little effect.

The reason we think it is teething is because

He is also tugging at his ear, but I think that’s a sign of referred pain. I don’t think he has an ear infection, because the ear tugging was happening in Nova Scotia, too, before he caught Captain Trips (that’s what PH and I have been calling this cold we picked up out there, because it keeps lingering. We both still have coughs. Babby seems totally recovered). And I remember ear infection pain from my childhood and it’s awful. His painful spurts seem to be more sporadic. He’s cheerful enough most of the time, but he just can’t stay asleep because he wakes up screaming.

Not really sure what to do about it, besides tough it out and offer him teething rings. Tylenol/Advil might help a little, but not much. I wish a tooth would break through so at least we’d know that this is teething and not something else.

So I am very tired, and trying to shake the feeling that my baby is disapproving of my inability to help him… 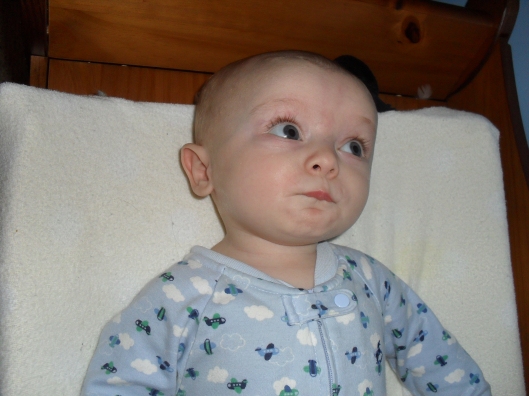