I was standing in line at the food court when I caught the eye of a tall Asian lady, eyeing my baby.

“I’m sorry, I just have to tell you,” she said, “Your baby is so adorable. I’m pregnant myself…”

“Congratulations!” I said, “is this your first?” but I knew that it was and wasn’t surprised when she nodded. She wouldn’t be mooning over Babby if she had her own babby at home. We smiled at each other, and she stared at Babby, who goggled right back at her with his wide eyes.

She smiled at him, looked at me, and smiled some more. I could see her brain working, and I remembered being pregnant, and looking at people with new babies, and the things I wanted to ask them but didn’t… and I remembered the unwanted advice and useless warnings people love to throw at pregnant women.

“If anyone tells you to sleep while you still can, bop them in the nose,” I said to her abruptly.

She laughed. “People are always telling me that! They say I’ll never sleep again…”

“Doesn’t matter. You can’t store up sleep in a jar for when you need it, so it’s completely useless advice. You’ll be sleep deprived when the baby is born no matter what you do before hand.”

“That’s what I keep thinking,” she said.

There was a pause.

“It’s so much fun,” I said out of the blue. A look of relief spread over her face.

“Yes. Don’t let people scare you. People kept telling me how awful it would be, but it really isn’t. I mean, he’s been awful. He has reflux, he screams all the time, he doesn’t sleep, he’s never done eating, and he’s not gaining weight as quickly as he should be, so I’m worried about him. But… it’s still SO. MUCH. FUN.”

“That is SO nice to hear,” she told me, looking at Babby again with excited joy.

My food order was up, so I picked it up.

“It was nice talking to you,” I said.

“It was very nice to meet you,”  she gushed, adding, “your baby’s asleep.”

And you know? He was. 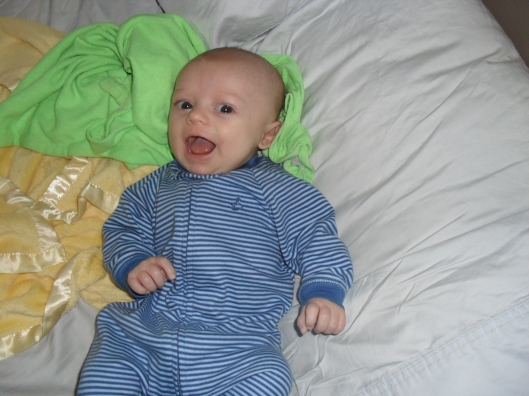