Babby is ten days old today. His birth feels like a lifetime ago. And also like yesterday. He’s a good baby, generally, and overall I like him quite a lot. But cluster feeding is from the devil, I’m here to tell you now. I like nursing him, but sleep would be nice.

My mother has been here helping out and I have no idea how I will survive without her. She and Dad are supposed to leave Monday, but she’s going to see if she can switch her ticket to stay for another week. This after I started weeping over my baby this morning out of exhaustion.

The first three nights of his life largely involved screeching to the point where we feared the Dread Demon Colic. The next few nights were actually just fine. He would wake up, nurse, and sleep for another two or even three hours. However, the last two or three nights have been getting increasingly worse. His nursing sessions have stretched from an hour to an hour and a half to even two hours long. Even then he fusses and cries and I have trouble settling him. Once I do, he’s up in only an hour or two at most, and it starts all over again. Poor PH is back to work and so must actually sleep at night as much as possible, so it’s no longer a tag-team effort.

This morning I woke my mother at 8:30 completely exhausted after a two hour feeding session, which was preceded by an hour of sleep after an hour and a half feeding session. She spent nearly an hour humming and singing him to sleep while I hovered around fretfully, and then shooed me upstairs for a nap. I slept for a couple of hours, then nursed him again, and the time between two and three thirty was spent in us taking turns singing to him and rocking him while he fought sleep valiantly. His eyes would close for a little while, then pop open just as we were starting to relax. Another hour and a half nursing, and now he’s finally out for the count. I went back to sleep once he was out, and got another hour before PH came in, wrapped his arms around me, and roused me for dinner. I’d forgotten to eat lunch, and my mother is still beating herself up for forgetting to force feed me.

On most days I’ve been feeling good. But a couple of those bad nights and BOOM – I feel like I can’t possible handle it.

What on Earth will I do when his Nana isn’t here to take over for me and let me get some sleep? 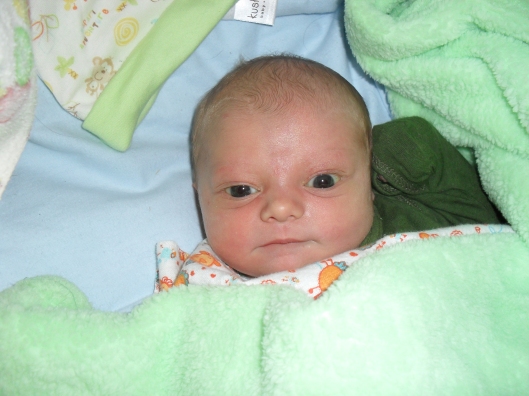 My little sea turtle. Unfortunately, I can't adopt the sea turtle style of parenting and let him crawl out to sea on his own.