So, on day five of being a puppy parent, I had a break down. I started wailing uncontrollably in the garden.

My boyfriend of the time, who was visiting for the weekend, was like “Whoa. Okay.” He told me to go upstairs and go to sleep. He would take care of the puppy overnight. I was to sleep. Just sleep. The puppy went in the spare room with my boyfriend and I slept the sleep of the dead.

Things looked better in the morning. 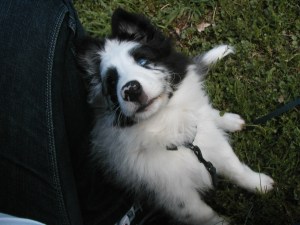 I can has Smokey?

Over the next couple of weeks, I began to get the hang of it. He started sleeping for longer periods in the night time, and I discovered that he loved eating slices of Smokey cheese-stuffed sausages. Within a weekend he had started to pick up that peeing in the garden resulted in a slice of smokey, whereas peeing on the carpet resulted in a lot of nothing.

That was the real turning point.

Soon he was peeing eagerly to receive sausage, and I began to focus on putting it on command, and getting him to tell me when he wanted out. My mother and I looked everywhere for a set of jingle bells to hang on the door knob for him to jangle, but could find no such thing (in Vancouver, Land of Granola-Eating Pet People, you can find exactly that in many pet stores. I was not in Vancouver).

So I decided that if I could train a rat to press a lever, I could train a puppy to push a button. We bought one of those battery operated doorbells with the wireless doorbell button. We stuck the ringer in the kitchen, and the button by the back door. I spent a long time smearing peanut butter on that button, and clicking him for going near it and licking/nudging/sniffing the thing.

There was the slight issue that my puppy didn’t learn as fast as a rat. He was only nine weeks old, after all.

But while I often felt frustrated (and so did he – he would start barking in impatience, unable to figure out what I wanted), I knew I could do this. My self-confidence, thanks to The Great Smokey Breakthrough of ’04, was restored and even if my expectations were still sky-high, my schedule was more relaxed and realistic. I accepted that he might not learn this quickly. I accepted that it might take, quite frankly, for FRICKING EVER. But I knew that some day, my dog would ring a doorbell when he needed to go outside. 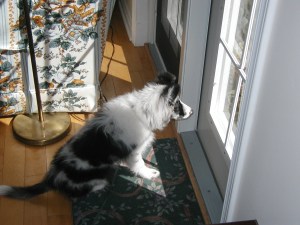 Whenever the bumbling efforts resulted in an actual ring from the bell, I immediately threw open the door and led a wild romp outside, to his great delight. It still took him a long time to figure out the connection, and even longer to figure out how to set it off. Nowadays, I could teach him this same trick in under ten minutes. But he was younger and stupider back then.

I was rewarded when he was 12 weeks old. I had left him with my mother for a few days to visit my boyfriend in Newfoundland, where he was getting his B.Ed. I called home to check on my furry baby, and as my mother was giving me an update, an unmistakable sound ding-donged in the background. My puppy had rung the doorbell. Mum immediately got off the phone and took him outside and I did a dance around the room.

From then on, things were a lot easier. The sound of that ringing doorbell had us all jumping to action, but the number of mistakes in the house declined remarkably. When I moved into my new apartment at the end of the summer, my dog was five and a half months old and pretty much housebroken. With the exception of illness (like the Ice Cream Incident), I can only think of two or three mistakes he made in the new place. But boy did I rely on that doorbell. My Beloved Dog hasn’t used that doorbell in years. Now he waits patiently until I decide to take him outside, even if I don’t get around to it until two in the afternoon (IRON BLADDER!). But that first year, it was a godsend.

I spent that year constantly following him around the house, and rewarding/punishing as necessary every single thing he did – and he never stopped moving. I never dared leave him for more than three or four hours at a time, and then only in a crate. We had to get sitters for him if we wanted a night out.

I discovered the joy of squeaky toys – because when I could hear that squeaky toy, I knew what he was doing. That meant that so long as I could hear that high pitched incessant squeaking from the next room, I could actually take my eyes off of him, sit down and do something else for a few minutes. I could actually check my email, or read a book for five, maybe even ten minutes at a time!  I grew to love that ear piercing squeal. It was the sound of being able to sit down and rest.

I initiated a routine that involved a long walk with stick-fetching if he pooped by a certain point, and an abbreviated walk if he had not pooped by the time we reached that point. He learned quickly that Poo is Worth It.

He was my pride and joy, and the bane of my existence all at once. But really, I loved my enslavement. I loved that my training was working. I had forgiven myself for thinking that I could do in a few days what actually takes weeks and months to accomplish, and for thinking the speed of his learning curve reflected on my abilities. The important thing was that I could accomplish it, and that this pain in the ass, this constantly moving, chewing, romping ball of fluff was actually learning. 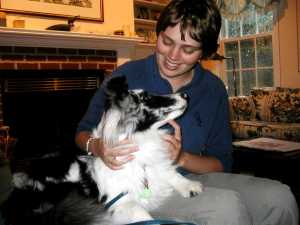 My baby had a brain

He came when called, he left things when I told him to, he peed and pooed on command. He could do sit, down and stand-stays. He could play dead. He could fetch. He could play tug. He obeyed hand signals. He dropped things that I told him to drop, and gleefully grabbed things to keep away from me when I said “I’m going to get you!” and yes, he rang a doorbell with his nose when he needed to go outside.

I was learning, too. With the arrival of Mr. Squeaky, I discovered the joy of Knowing He Was Occupied. I became highly skilled at keeping the puppy busy.

Possibly the best gift my dog ever received was from Perfect Husband, who was simply Adoring Best Friend Living in Vancouver And Worshipping Me From Afar at the time. He came to visit me for Christmas and brought a Buster Cube as an offering to my new fur baby. I had already begun to rely on Tricky Treat Balls to feed and occupy my ever-busy puppy, and the Buster Cube took food puzzles to a college level. Six years later, we still fill that same puzzle for him on a daily basis. No food bowls for this dog; not since he was seven months old. He works for every single kibble and it keeps him busy when we leave the house. Buster Cube = GOD SEND.

Then, at one year old, he grew up. It was sudden. Over a matter of a month or two he went from a spazzy freak to a calm, obedient, and reliable dog. Since then he has hardly ever caused me a moment’s grief, unless you count the occasional copious diarrhea incident. He’s a good boy, who lies quietly in whatever room I am inhabiting and waits patiently for food, walkies, and anything else I deign to give him.

Still high in my priorities

In a strange way, I miss his youth. He’s too easy now, and too easy to list lower in my priorities. I suffer guilt when I realize that it’s nearly three and he hasn’t been on his walk yet; when I realize his cube has been empty all day; when I realize that Mr. Squeaky has been in a bag in the pantry for over a year. Part of me misses the days when my world revolved around him… because part of me revelled in being so wrapped up in another creature. I still love him. I love him more, probably, than when he demanded every minute of my every day.

But part of me misses the days when he was a furry toddler leaving destruction in his wake, needing my constant supervision and guidance. Now… he’s all grown up.

Warning: This video is rated C for Cuteness. Uncontrollable “squee” noises may result.

10 thoughts on “My First Reality Check, Part the 2nd”