They say that no matter what you do, nothing will prepare you for the reality of having a child.

In 2004, I was desperate for a dog. My first dog had died when I was in Junior High, and my recently-retired parents didn’t want to be burdened with another. Now I was graduating university and finally in a position to own and care for my own puppy. How can you be a dog trainer if you haven’t owned a dog in your adult life? Would you hire a dog trainer who hadn’t owned a dog in 10 years?

My longing for a puppy was deep and desperate. Checking out good Sheltie breeders, I found a litter that was perfect – exactly what I was looking for – but already born and all spoken for. I wept and wept over those pictures, spilling bitter tears of heartbreak. Yet one of those puppies was to become my Beloved Dog.

“I know were were talking about upcoming litters,” the breeder said to me over the phone, “but I was wondering if you’d be interested in the bi-blue boy from this current litter. He… reminds me a lot of his mother, who is my favourite dog. But right now he’s lined up for a very elderly couple, and… I think this pup would do better in a “performance” home…”

I jumped at the puppy. I knew it would be a challenge. This was a puppy who the breeder felt would be too difficult for a settled and elderly couple. Who better to take him on than an aspiring dog trainer with a diploma in behaviour modification? 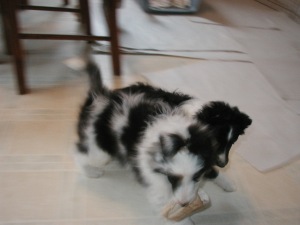 When we went to go meet him, the litter jumped all over me except for this one, who roamed obsessively around the room as if unable to keep still. Twenty minutes later, the 6 week old pups were slumbering deeply. But not the bi-blue boy. No, he was still roaring around. He was roaring around a good hour later, when we left.

But, I had read the books! I knew I could handle this puppy. The Culture Clash was my Bible and I read and re-read it obsessively until I knew it by heart. I read Don’t Shoot The Dog, which summarized what I already knew about operant conditioning. I bought a crate and kongs and clickers, spent hours choosing the perfect name, and told everyone my plans for training the heck out of him.

The first week was terrible.

The books all say that puppies that age spend most of their time sleeping. I have since found out that the books are right… about most puppies. But nooooooo. Not MY puppy. We brought that puppy home and he didn’t sleep for 13 hours. He tore around unstoppably for hours and hours, not collapsing into sleep until we physically restrained him in a tight embrace at midnight.  He would also stop to dig at the carpet obsessively every few feet. I thought there might be something wrong with his brain.

The books made it sound like puppies constantly piddle everywhere. I have since found out that the books are right… about most puppies. But nooooooo. Not MY puppy. We joked about making his pedigree name “Iron Bladder” because he would go for hours and hours without toileting. The books said to take him outside every hour or two for a potty break so he would develop good habits. The books didn’t say what to do when it’s the end of April in Nova Scotia, and four in the morning, and you’ve been standing outside shivering for forty five minutes, covered in dew, waiting for your puppy to pee. And then, when you admit defeat and bring him in to get warm because the poor thing is soaked and shivering, he does what the books say you should never allow to happen, and pees right there on the floor.

It was around day 5 that I cracked.

Part of it was the sleep deprivation. I was getting up diligently in the night, every two or three hours, to take my little Iron Bladder outside for what my father referred to as “evening constitutionals”.

The rest of it was high expectations. I wasn’t prepared to get a puppy who hadn’t read the books. I wasn’t prepared for the books to let me down. I had expected to be awesome, and now I felt like I was messing everything up. When my puppy wouldn’t take the high value treats I offered him, I despaired that this un-motivated puppy would never be the dog I wanted. When my puppy pooped on the floor for the third time in a row, I felt sure that he would never be properly house trained, because he was picking up bad habits and I was failing him as a trainer. When my puppy preferred digging at the rug over interacting with me, I was sure that we would never bond.

I felt helpless. I felt frustrated. I felt like a failure.

Every mistake I made felt like a knell of doom; one that would have lasting repercussions forever.

I felt bogged down by this woolly little nightmare who was nothing that I had ever imagined.

All the books in the world had not prepared me for the reality of this puppy.

Next: My First Reality Check, Part the 2nd.