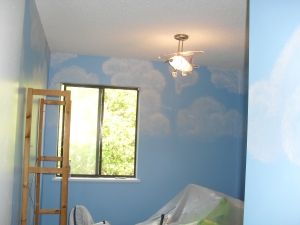 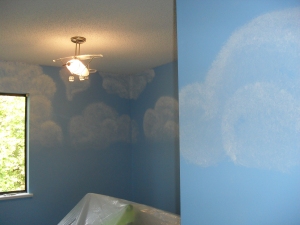 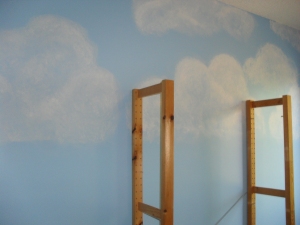 I love my friends. This is the room I always dreamed of. Better, because of the light fixture.

Don’t you love it? Perfect Husband picked it out a year ago, when we were shopping for lamps. He got all excited about it (he loves aerospace stuff – he can watch Mayday for hours and has a massive amount of NASA trivia memorized) but we decided not to buy it, because buying light fixtures for babies who don’t exist seems like a jinx. However, when I got pregnant, we went back and searched through a couple of Home Depots until we found it.

It’s a good thing I had always planned on a “sky” themed baby’s room, because that airplane was going in regardless. They had a ship one too, which appealed to the Maritimer in me, but a) Perfect Husband was like “nooo…. plaaaaaane!!” and b) since I was planning a SKY themed nursery, a ship wouldn’t have made a lot of sense (though I could have made a Wynken, Blynken and Nod argument).

Anyway, we opened up the box today and my friend was installing it when we realized… it didn’t have any bloody wings. I hear that’s kind of important. I was ticked. It was totally sealed when I opened that box, so why was there no wing? How was I going to convince Home Depot to give me the part? We bought this thing months and months ago – no way we still had the receipt. I was having nightmare visions of having to buy a whole new fixture, and what with cell phones and buckets of paint and everything else, money is not exactly abundant in the IfByYes household.

But I called the Home Depot where I bought it, and they didn’t give me any hassle at all. They didn’t accuse me of breaking it, or trying to rip them off. They just invited me to come down, which I did (friend’s son in tow for company) and they ripped open a new box, yanked out a wing, and said “there y’go.”

Home Depot, if you have customer service people trolling the interwebs for customer comments, like Shaw did for Mommy By Day, please here this loud and clear: I love you, and THANK YOU.

Now I have an amazing baby’s room. Now, if only I could afford furniture for it…

11 thoughts on “Blue Skies, Smiling at Me”